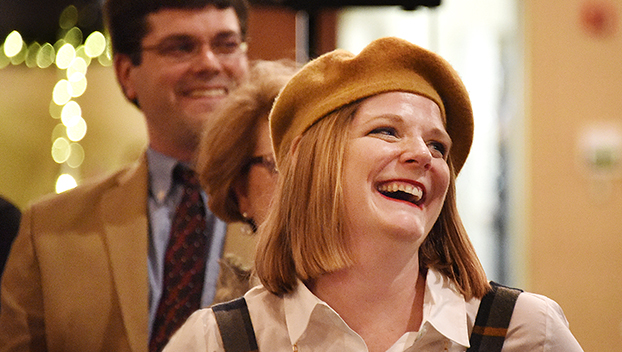 Sarah Lindsey Laukhuff was named this year’s Natchezian Woman of the Year at the Natchez-Adams County Chamber of Commerce Gala Tuesday. (Ben Hillyer / The Natchez Democrat)

Getting things done: Laukhuff enjoys being involved in community

On the evening Laukhuff received this year’s Natchezian Woman of the Year award at the Natchez-Adams County Chamber of Commerce Gala, Laukhuff was busy at the Natchez Convention Center making sure everything was ready for the annual celebration.

On the chamber’s gala planning committee, Laukhuff said she had no idea she would be one of the evening’s honorees.

“I was completely overwhelmed and basically in shock,” Laukhuff said about the moment she realized she was going to be named this year’s recipient. “There are plenty of other people who are deserving of this honor.”

Receiving the award was not the only surprise of the evening for Laukhuff.

On an evening when she thought her husband Chase was working on an oil rig and other family members were miles away, Laukhuff realized they were watching from the side of the auditorium all along.

When she spotted her husband, her father Bob Rogers who traveled from Dallas, her mother Patricia Duffy and her brother Bryson and his wife, Shelley, Laukhuff rushed to greet them with hugs and kisses.

“I am such a cry baby,” Laukhuff said. “I burst into tears.”

When Chamber President Debbie Hudson announced the award she recognized Laukhuff’s willingness to serve, her unique abilities to make projects successful and her “knack for inspiring others to do the same.”

“Her endless energy and commitment to excellence shine through in her position as Director of Sales for the Hotel Vue in Natchez,” Hudson said.

Since moving back to Natchez from New Orleans, Laukhuff has been a steady contributor to the chamber and other local organizations.

She is the current president of the Natchez-Trace Kiwanis Club. She is also the chairman of the Natchez Tourism Marketing Advisory Board and the chamber’s Tourism Council.

She also was the 2019 chairman of Trinity’s annual fundraiser Claws for a Cause.

“It is part of my personality to stay involved,” Laukhuff said about her work throughout the community.

In her speech at the gala, Hudson said one of Laukhuff’s talents is the ability to make whatever job she does enjoyable.

“For those of us who are fortunate enough to know Sarah Lindsey, we know she is fun loving. She doesn’t like doing something unless she can turn it into fun,” Hudson said. “She knows that if Natchez does not have something, she will be on the hard-working team to make it happen.”

When she is not working on a committee or at the Hotel Vue, Laukhuff is usually spending time with her husband and their 3-year-old son John Graham or using her artistic talents to paint and create.

Laukhuff said she is thankful for the many kind words that were said about her and her service to the community during the gala.

“I was honored and humbled and I realized I will not be able to get off all of those committees,” Laukhuff said jokingly.

New commercial enterprises start up throughout city, county this year

NATCHEZ — In 2019, Natchez has seen several new businesses pop up across the area. In the downtown area alone,... read more