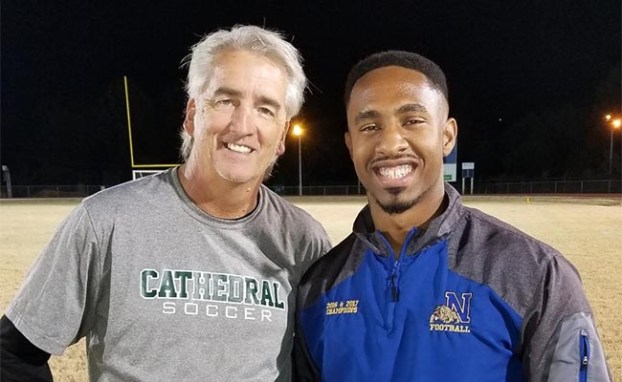 From left, Cathedral Green Wave Head Soccer Coach Dennis Hogue and right Natchez Bulldogs Head Soccer Coach Josh West pose for a photo after Cathedral’s 3-1 win over Natchez on Nov. 21. One of Hogue’s former players, West said it was exiting to play against his former coach. Submitted by Josh West

NATCHEZ —The Cathedral Green Wave boys’ soccer went on the road on Nov. 21 for a soccer match against Natchez High. Green Wave cruised to a 3-1 win over the Bulldogs.

“Those soccer players for Natchez were fast,” Hogue said. “That was what I was trying to tell my team. I said to them, ‘we might have more skill but I guarantee they have us on speed.’ It was completely unexpected, it was a match to see who can get to the ball first and do something productive with it.”

The Bulldogs obtained the first score of the game in the 20th minute. Tabius Woods obtained a free kick from 20 yards out in the top right corner of the goal. Woods has scored in the last two games for the Bulldogs.

“We have to help him and get other people involved,” West said. “We have to learn how to create opportunities to score.”

After Natchez took the early 1-0 lead, Kennedy Williams earned a penalty kick, for Cathedral due to a tackle by a Natchez player inside the goalie box. Williams scored and tied the match up at 1-1.

A little while later, Williams scored again just outside the box for the Green Wave. Hogue said J.C. Austin took the shot and one of the Bulldogs defenders jumped and defended it. Austin flipped the ball behind him and Williams hit the ball with his head towards the goal.

Grayson Guedon scored the last goal for the Green Wave on a loose ball in the box in the second half.

The game featured two coaches who have known each other since 2006. West was one of Hogue’s former players when Hogue was the soccer coach at Natchez High School from 2006-08.

West said the match was exciting and was fun to play against his former coach.

“It was no pressure playing against Coach Hogue,” West said. “I don’t feel pressure from coaching soccer. Of course, I want to compete and win. But there wasn’t any pressure for them being there. It was comfortable environment. It was like a scrimmage match.”

NATCHEZ — In a rivalry basketball game on Friday night, the Natchez Bulldogs beat the Jefferson County Tigers 48-15 at... read more