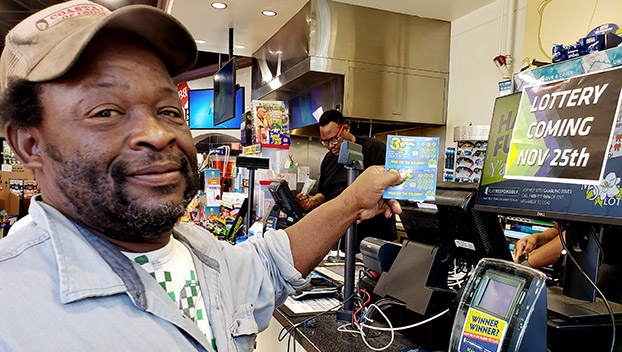 Locals line up for first day of Mississippi Lottery

At least 15 stores are selling the lottery tickets in Natchez.

“I’m glad and I’ll definitely be glad if I can win,” Ernest Bland said of the lottery as he purchased his first set of scratch-offs Monday afternoon at Sprint Mart near East Franklin Street and Melrose Avenue.

“We’ve had about 1 million people buy them,” said Devin Anderson, a Sprint Mart cashier. “I’m exaggerating of course, but it certainly feels like that many.”

Tom Graning, owner of Go Mart on Seargent Prentiss Drive, said his store is also among those who sold tickets Monday.

“We just had a $100 winner,” Graning said Monday afternoon. “We thought everyone would have heard about it by now, but people are just now starting to figure it out so they are coming in and seem pretty excited about it. I think this is a great thing for our state.”

The state receives most of the money generated from lottery ticket sales for infrastructure improvements and education while approved retailers receive a 6 percent commission on their sales, according to the Mississippi lottery website.

So far, Natchez has four different scratch-off tickets available at local convenience stores that are between $1 and $5 each while the multi-state Powerball and Meg Millions tickets won’t be available in Mississippi until Jan. 30, Graning said.

Savannah Hammers, cashier at Blue Sky on John R. Junkin Drive, said her store had sold more than 100 tickets by Monday afternoon and also had a person win close to $100.

“They say in the first six months of having the lottery is when you’re most likely to win,” Hammers said. “I might even try my luck.”

NATCHEZ —The Cathedral Green Wave boys’ soccer went on the road on Nov. 21 for a soccer match against Natchez... read more