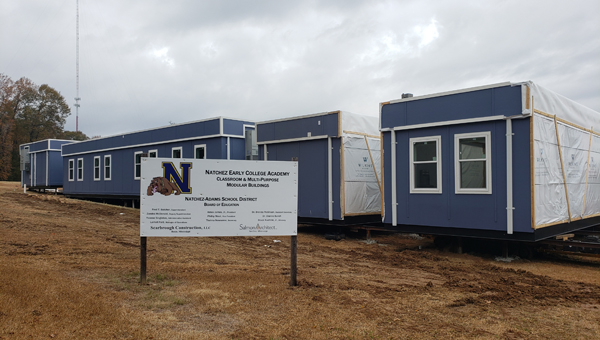 During a special-called board meeting Tuesday, Natchez Adams School District Superintendent Fred Butcher said the classrooms should be ready for an official grand opening and ribbon cutting in early January.

The full project costs approximately $600,000 and includes four classroom buildings and a multi-purpose facility at the rear of Co-Lin’s campus.

NECA had previously been able to utilize spare classrooms at Co-Lin.

However, after both the community college and the high school extension program started to expand the programs they offer, additional space was needed for NECA, officials said. To celebrate the new addition, and to make room for more people to be involved in the school district’s board meetings, Butcher recommended that the school board meeting on Jan. 21 be hosted at NECA and the school board approved the motion unanimously.

Other board meetings will be held at other schools in the district periodically going forward, Butcher said, which could increase board members’ visibility among students, parents and school personnel and make it easier for more people to attend meetings.

The board attorney Bruce Kuehnle said some business matters, such as opening and awarding bids to contractors, would continue to be conducted in the boardroom at the Braden Administration Building as they are advertised in advance.

“Having our presence in other places is always a positive thing,” board member Dianne Bunch said during Tuesday’s meeting.

Pop-up markets to be on Saturdays

NATCHEZ — The Downtown Natchez pop-up market, traditionally held on Fridays, has been rescheduled to Saturday and will continue to... read more