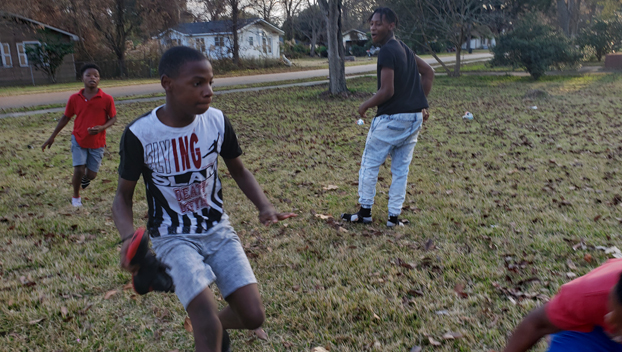 Dakalen Scott, 14, runs from his cousins with the shoe. (Sabrina Robertson, The Natchez Democrat)

VIDALIA — A group of aspiring professional athletes didn’t need shoulder pads, helmets or even a football for their weekend practice in a Vidalia neighborhood Saturday afternoon.

When The Dart landed near the Bates brothers’ makeshift football field on North Spruce Street, serious gameplay was going on with no official rules and only a red and black tennis shoe serving as the football.

“The only rule is every man for himself,” said 13-year-old Nathan Bates.

Nathan, Nathaniel and their youngest brother Lathan are each one year apart in age and said they like to try and tackle their older cousin Dakalen Scott and brother-in-law Kemarris Williams as they run the “football” down the field.

“We do play with a football but if we don’t have one of those with us we will play with a shoe, a water bottle or pretty much anything,” Williams said.

Scott, Williams and each of the Bates children all play sports in school as well, they said.

While the Bateses are prepping to join the Vidalia junior varsity football team when they are older, Scott plays for Ferriday High School’s football team and Williams has tried his hand in several different sports in Fayette, including football, basketball and track and field.

“I’ve made it to the state championship in track,” Williams said.

His skill showed as he drove the ball right between his younger relatives so quickly they couldn’t touch him.

Like a good neighbor, Stuart Heflin’s State Farm branch in Natchez was recognized with the Small Business of the Year... read more