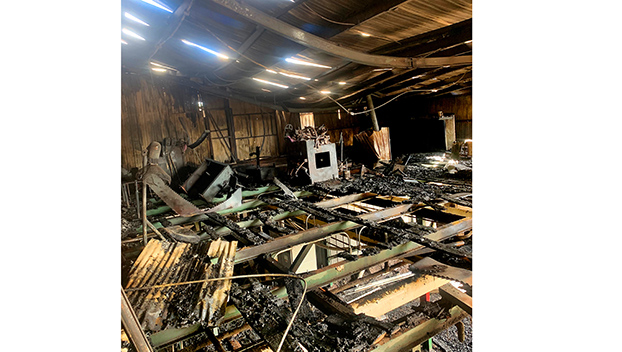 The Wilkinson County Board of Supervisors met Nov. 25 at which time a representative of Fred Netterville Lumber Company appeared to complain about the lack of fire protection because of broken down equipment and a shortage of volunteer fire personnel.

He stated, “I am here as a concerned citizen and an angry businessman. Netterville Lumber Co. employs over 120 workers and last year our payroll was $3.6 million. Last year we paid $112,000 in property taxes to the county.”

Netterville continued, “We suffered a serious fire in the main mill building which started just before midnight on Friday, Nov. 22, and continued into the early morning hours of Saturday, Nov. 23. The jobs of 50 of our employees have been affected by this fire in our main mill. We don’t know if we will be able to keep them employed.”

He reported, “The Buffalo Volunteer Fire Department is housed in a building located on our property across the Buffalo Road from our mill in a building we built especially for the department. The truck is regularly maintained by Fred Netterville Lumber Co.”

Netterville said on the night of the fire his employees got the Buffalo Fire Department truck and began pouring water on the fire until other trucks could get there. Fire trucks from Centreville, Gloster and Adams County came to assist.

“The county fire coordinator came to the fire and shut down the Buffalo truck while it was putting water on our fire,” Netterville said. “At one point my men were threatened with arrest for using the Buffalo VFD truck.”

“We are facing $5 million in damages. We need better fire protection in our county to protect businesses and personal homes and property,” he added. “Something needs to be done about this serious issue with the lack of fire protection.”

Supervisor Seal stated, “About three months ago Netterville Lumber Company owner Charlie Netterville called me to say that the Buffalo fire truck was broken down. Who is responsible for getting the truck repaired?”

Seal was told that Fire Coordinator Mary Frederick was the person responsible for keeping all trucks in working condition.

Centreville Fire Department Chief Edward Harris was present at the meeting and said, “Fire Coordinator Mary Frederick was sick, but came to the fire. She did not shut the Buffalo truck down, I did. It was not being operated properly, and it was in the way. The man operating the Buffalo truck was not trained to operate it. We had other units on the way with trained firemen. I had it moved back to the Buffalo fire station to make room for fire trucks from Gloster and Adams County.”

Netterville countered with, “That truck was being used and was pumping water on the fire. It was the first truck on the scene. It was working fine when it was shut down.”

He added, “I am worried about what I am getting for the amount of money we pump into this county.”

Woodville Fire Department’s Patrick Smith said, “We don’t have enough firefighters who will volunteer to come out at night for just $15 per fire. They just won’t do it any more. We are shorthanded at this time.”

Netterville responded, “We need to do something about the lack of operating equipment and shortage of volunteer firefighters.”

Board president Jackson said, “I agree, something needs to be done about these problems. I am calling a meeting of all county fire departments and personnel. We will meet about our county volunteer fire departments. . . .”

Bd. Pres. Jackson went on to say, “Mr. Netterville, I want to apologize to you and your business for your loss. We are going to do what we can to make things better.”

The county authorized CVFD Chief Harris and WPD’s Smith to pick up the Buffalo truck to take it and see what is wrong with the truck’s transmission and to see if it can be repaired.

NATCHEZ — The Adams County Board of Supervisors wrapped up their last meeting of 2019 Monday morning by saying... read more