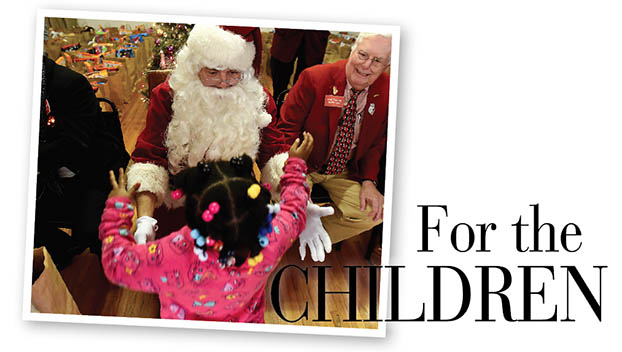 For more than a century, group continues to bring Christmas joy

Once a year, people all over the world willingly litter their living rooms with toys and Christmas wrapping paper and the bright smiles on their kids’ faces make it all worthwhile.

Unfortunately, not every child gets to experience that same joy every Christmas.

Some parents have to choose food, clothing, running water or electricity over toys for their little ones.

For more than a century, the Children’s Christmas Tree Fund has made it possible for those children to have a “Merry Christmas” too, organizers said.

Every Christmas eve in Natchez, hundreds of children are called out by name — one by one — to meet Santa, receive a sack of presents and a surge of joy that they might not experience otherwise.

While the people of Natchez shop for their Christmas goodies, they could also contribute to a charitable cause to help children in the area who are less fortunate.

History of the Tree

Lambert lived only a short while after founding the charity and the tradition was carried on by newspaper employees and Lambert family members until Lambert’s longtime friend, Katherine Killelea, took over as director of the fund in 1970.

When Killelea witnessed the number of children who received gifts shrinking — but not the number of those living in poverty — she recruited the help of Catholic Charities to locate and register new children who would benefit from the fund.

In 2006, the responsibility of directing the Children’s Christmas Tree fund was handed back to Lambert’s descendants.

Because Lambert is Junkin’s great-grandfather, Junkin said he recalls volunteering for the Children’s Christmas Tree Fund for most of life and has now led the fund as director for almost a decade.

“If you come on Christmas Eve to the Braden School, you can see for yourself why this is important,” Junkin said. “Seeing the looks on those kids’ faces makes it all worthwhile.”

Kids tend to smile over a shiny new toy, but there’s nothing quite like the joy of meeting the big man himself.

That’s why the Children’s Christmas Tree Fund joined forces with a group of businessmen in the 1920s who collectively decide who gets to do the honor of wearing the red suit and beard and pass out presents on Christmas eve in the Braden Administration Building on Homochitto Street.

The Santa Claus Committee oversees the annual celebration on Christmas Eve, which begins with a makeshift parade through Natchez neighborhoods before Santa makes his way into the Braden auditorium.

Even kids who aren’t lined up to receive presents can wake up early on the morning before Christmas and spot Santa riding in the Rudolf position of the parade and try to catch some sweets while they’re at it.

With the support of many generous people, Catholic Charities and the Natchez Santa Claus Committee, the Children’s Christmas Tree Fund passes out toys and treats to children who may not receive them otherwise year after year.

“It’s a joy to see the kids on Christmas receive Christmas gifts they might not otherwise get,” Nobile said. “They are just very happy, and full of smiles.”

Arguably the gifts of happiness are equally or even more rewarding to the givers.

Nobile said people from all over donate to the tree fund while a group of about 20 to 25 regular volunteers in the community help during the festivities on Christmas eve.

Before that, it’s just the Lambert family gathered in Junkin’s home with approximately 1,500 presents filling each room.

Nobile said she remembers helping her family since she was old enough.

“It’s a very rewarding charity and I’m glad to be a part of it,” she said.

All of those smiles are made possible by the kindness and generosity of groups and individual donors, Junkin said.

In the past, the Children’s Christmas Tree accepted toys as well as monetary contributions, Junkin said. However the fund’s primary need is monetary donations. This is so that it’s easier for organizers to purchase four or five toys and goodies of similar or equal value for each child rather than upsetting one child over another.

“We deal with children from one to 10 or 11 years old and pass out toys, fruit and candy,” Junkin said. “… Donations are accepted year-round, but 95% of our funding usually comes this month.”

Though it’s called the “Christmas” fund, the account itself never closes, so whatever money is left after the end of one Christmas eve carries over to the next, Junkin said.

Acknowledgments are also printed in The Natchez Democrat each year for those who donate and in memory of individuals they chose to honor with their donation.

“We’ve already started gathering toys,” Junkin said. “We put it on credit and hope others will show up with the money. It takes about $10,000 each year. … We’ve been very fortunate in previous years because people in Natchez have always been generous.”

By Tim Reeves The Vicksburg Post PORT GIBSON — If reports become reality, Claiborne County could be home to a... read more

Dead bodies are stacking up in this Mississippi county, here’s why

Someone to look up to: Merrill sworn in for second term as Vidalia police chief