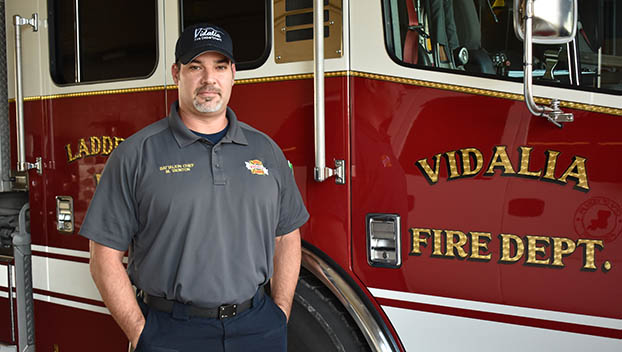 Vidalia Fire Department Battalion Chief Matt Taunton stands in front of a fire engine on Friday. Taunton has served as a battalion chief for 10 years. (Patrick Murphy, The Natchez Democrat)

VIDALIA — Matt Taunton, the Vidalia Fire Department Battalion Chief for 10 years, is passionate about his work and spending time with his family.

When The Dart landed at the Vidalia Municipal Complex on Friday afternoon, Taunton was inside Vidalia Fire Department preparing for the rest of the day.

Taunton fell in love with firefighting 16 years ago in Natchitoches, Louisiana. Taunton said he absolutely loved it when he began.

“It’s [firefighting] not mundane and every day can be different,” Taunton said. “It’s an adrenaline rush at times. The only problem I have is being gone from my family every third night.”

When he has free time, Taunton likes to spend time with his kids and take them to wherever they want to go. Taunton said his kids love knowing their father works for a fire department.

Taunton worked through the rankings of the fire department. For four or five years, Taunton has been the Battalion Chief for the Vidalia Fire Department. A battalion chief is the third highest-ranking after fire chief and assistant chief. On Friday, Taunton was the highest-ranked firefighter on duty. Taunton said there are pros and cons to being a battalion chief.

“The pros to being a battalion chief are you get put into situations where you have to figure out what to do and how to utilize your manpower and equipment with the fire service,” Taunton said. “The bad thing is I’m more of a hands-on person. I like being involved and doing more of the hands-on work, whether it would be fire fighting, EMS or doing vehicle extrication. It’s harder for me to stand back and direct people than it is to actually be hands-on and participate.”

Taunton has worked for the Vidalia Fire Department for 10 years and in January is his 11th year in Vidalia. Taunton said he likes the small-town community of Vidalia.

“It’s just big enough but not too big,” Taunton said. “I’m not a big city guy, so I like it here. It’s small enough to have that homey feel. You go into places, you see people and you know them.”

When American Medical Response was named this year’s Large Business of the Year, employees say they were surprised and elated... read more