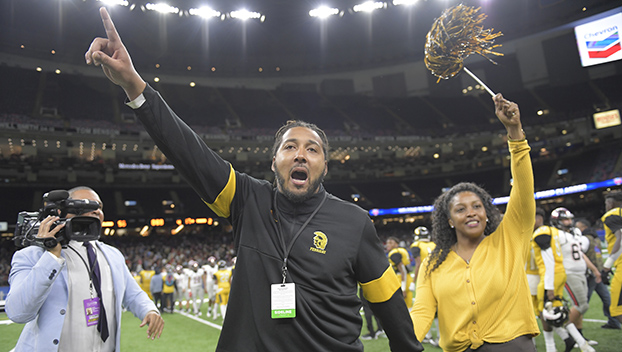 By Patrick Jones and Patrick Murphy

NEW ORLEANS, La. — The No. 1-seed Ferriday High School Trojans defeated the No. 2-seed Many High School Tigers 56-17 Friday afternoon at the Mercedes-Benz Superdome to win the LHSAA Class 2A State Championship.

“It’s elation to win the state championship,” Smith said. “To come up here with the black and gold to the New Orleans Superdome, it means a lot. I can’t imagine what it means to our kids. I can’t explain the feeling.”

After Many took a 3-0 lead just past the midway point of the first quarter on a 30-yard field goal by Trotter Lafollette, Byron Milligan’s 35-yard run to the Many 41-yard line on what was the final play of the first quarter led to Kobe Dillon’s 17-yard touchdown pass to Elijah White with 10:39 to go in the second quarter. Even though the try for two was no good, Ferriday (14-1) took the lead for good at 6-3.

Later on in the second quarter, the Trojans’ defense forced a fumble that Roosevelt Davis recovered and ran back to the Tigers’ 31-yard line. That led an 11-yard TD run by Dillon with 5:40 left. Dillon threw a shuffle pass to Blake Tarver for the two-point conversion and a 14-3 Trojans advantage.

One play after the Trojans forced a turnover on downs, Dillon connected with White on a 45-yard TD pass for a 20-3 lead with 4:24 left in the second quarter. Dillon scored on a 13-yard run with 28 seconds to go until halftime, just one play after he connected with Milligan on a pass that went 83 yards.

Ferriday led 34-3 on a two-yard run by Tevyn Byrd at the 7:08 mark of the third quarter before Many scored its first touchdown of the game on a 15-yard run by Terrence Williams with 2:42 left in the same quarter. The Tigers scored on a two-point conversion run to make it 34-11.

But the Trojans responded with a 19-yard scoring pass from Dillon to Justin Burns with 52 seconds remaining in the third quarter to go up 40-11.

Milligan had another big play, this time a 35-yard run early in the fourth quarter that set up his three-yard TD run three plays later with 9:59 left in the game. He added the two-point conversion run to give Ferriday at 48-11 lead.

Williams scored on a three-yard run for Many (11-4) to make it 48-17 with 1:52 left. But instead of taking a few knees and letting the clock run out even after returning the ensuing kickoff to its own 49-yard line, the Trojans used just 30 seconds as Milligan scored on an eight-yard run and Burns scored on the two-point conversion run to put an icing on the Trojans’ march to the state championship.