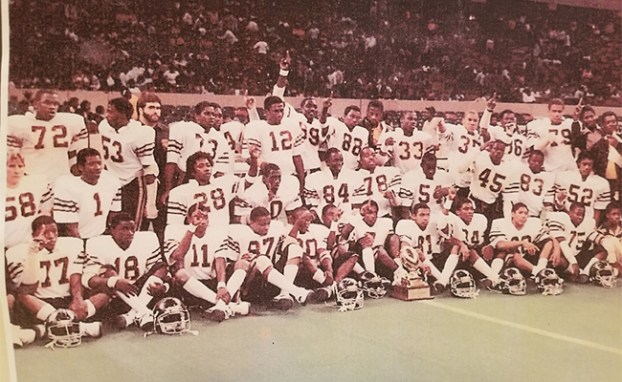 FERRIDAY — In the Class 2A state championship game between Ferriday High and Many High School in the Mercedes-Benz Superdome at 3:30 p.m. today, there will be a group of Trojan fans watching the game closer than others.

Some players from Ferriday’s 1984 state runners-up team will be in attendance at the Superdome today. In the 1984 state championship game, Ferriday squared off against John Curtis Christian School Patriots from River Edge, Louisiana. The Patriots won 23-7. James Jones was the quarterback of Ferriday High at the time.

“My first experience playing inside the Superdome has been one of the greatest experiences that I have ever had,” Jones said. “It was a special bond with my teammates and the community.”

Ronnie Reese Jr., a punter for the Trojans in 1984, said he remembers walking into the Superdome and seeing the New Orleans Saints’ special team practicing.

“I had the chance to see Morten Anderson [the Saints kicker] kick field goals,” Reese said. “I think being from Ferriday we weren’t used to playing in a large dome and playing in it made us feel like we were on top of the world.”

Anthony Moore was the nose guard and left offensive guard on the 1984 runner-up team. After playing for the Trojans, Moore decided to join Ferriday’s coaching staff as a defensive line coach from 1990-1997. When Moore was the defensive line coach, Ferriday made the playoffs seven straight times. But never played in the championship game. Moore said the town of Ferriday is excited for the Trojans return to the big game.

“It seems like it has brought the whole town together,” Moore said. “Everybody wants to go down to New Orleans and support the Trojans.”

In 2017, Jones was an assistant coach on Ferriday’s staff. Kobe Dillon, the Trojans’ current quarterback, was a sophomore when Jones was on the coaching staff. Jones said he remembers seeing Dillon’s demeanor.

“I never saw him be too happy or too upset,” Jones said. “With those characteristics, I’m not surprised Ferriday is where they are right now due to his leadership skills.”

“I truly believe they will bring it home this year,” Jones said. “I look forward to seeing the black and gold in the Superdome 35 years later.”

FERRIDAY — The No. 1-seed Ferriday High Trojans will face the No. 2-seed Many High School Tigers for the Class... read more