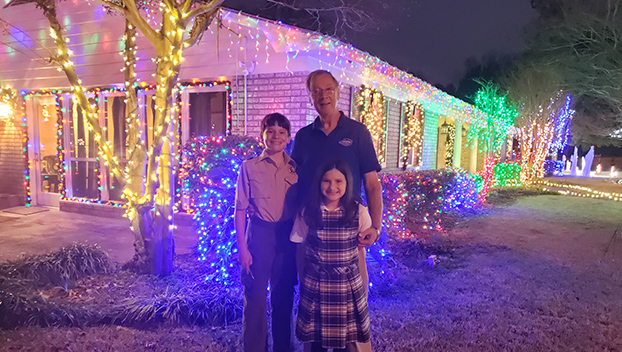 The Dart: Family decorations less about competition and more about spirit of season

NATCHEZ — The Brumfields’ house on Melrose-Montebello Parkway may have the most Christmas decorations on his street, but Ron Brumfield said he is not competing with his neighbors.

“It’s not a competition. I just enjoy decorating,” he said. “It gets me into the holiday spirit.”

When The Dart landed near Ron and Jo Ann Brumfield’s place Friday evening, their house was glowing with multi-colored lights around every bush and hanging from the edge of his roof.

Lighted wreaths hung from every window and a giant inflatable Santa stood in the center of his front yard next to a snow-white nativity scene.

Two of Brumfield’s grandchildren were also visiting Friday evening — Hayden and Claire Price — and one grand-dog was staying with the Brumfields while their son, Christopher, was away serving as a Lt. Colonel in the U.S. Air Force.

Ron Brumfield and Hayden were gearing up for a Christmas camping trip at a local Boy Scout hut on Highland Boulevard with other scouts.

The overnighter was more about having fun than earning badges, Hayden said, complete with snacks and video games and a friendly game of Cajun Santa.

Brumfield said his grandkids enjoy the holiday decorations too and even helped him decorate.

Hayden said his family decorates too, but not to the same degree as his grandparents.

Brumfield started his Christmas collection some 50 years ago and kept adding to it, he said.

Mayor’s Council: Much accomplished in 2019

NATCHEZ — It has been a little more than a year since Natchez Mayor Darryl Grennell appointed the first... read more