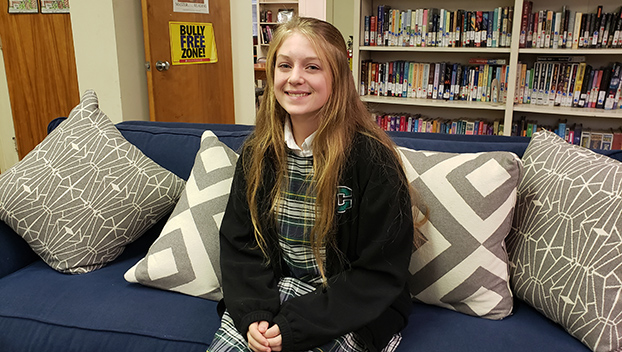 Liza Gregg, a Cathedral Middle School student, placed first in her division at the District Spelling Bee and will compete in the State Bee in January. (Sabrina Robertson / The Natchez Democrat)

Gregg, the daughter of Robyn and Justin Gregg and a seventh-grade student at Cathedral Middle School, placed first in her division and will be competing at the state competition in Jackson next month.

“It was my first year to do it. It was fun but stressful,” Gregg said of the spelling bee.

Gregg said her division pitted her against eight other students from other schools.

Two days before the competition, she was given a thick booklet divided into three sections based on the difficulty of the words.

Gregg said the hardest section had words from other languages she had never seen before, particularly Spanish and French, and she studied approximately 500 of the words up until the hour she went to compete.

“They only called out words from the low and intermediate sections, but I didn’t know that ahead of time,” she said.

Gregg said she plays both basketball and softball at Cathedral, but the spelling competition was nothing like the games she was used to.

“On the field, people yell and cheer for you, but that wasn’t allowed,” Gregg said. “It was so quiet — kind of eerie.”

While spelling is her newfound interest, Gregg said she also loves playing the violin and drawing.

Like her father, who is a veterinarian, Gregg said she is also passionate about caring for animals.

“I would like to be a veterinarian. My dad is one and I’ve always loved animals and want to help them,” she said, adding she has two dogs and two cats she cares for at home.

The Dart: Family decorations less about competition and more about spirit of season

NATCHEZ — The Brumfields’ house on Melrose-Montebello Parkway may have the most Christmas decorations on his street, but Ron Brumfield... read more