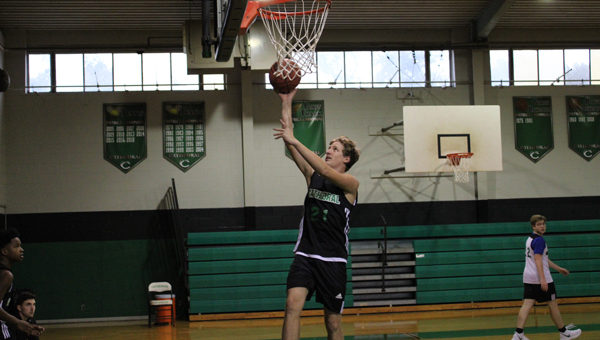 Cathedral High’s Noah Russ tries to make a lay up during practice on Tuesday. (Patrick Murphy, The Natchez Democrat)

At the WCCA tournament on Saturday, the Green Wave will play at 11 a.m. against Acadiana Christian School Defenders. Then, at 2 p.m. Cathedral faces Baton Rouge Homeschool Eagles. Both the Defenders and the Eagles are teams outside of Miss-Lou.

“It’s exciting that we get to play teams that we normally don’t get to play,” said Cathedral player JT Taylor. “It should be fun to play some new teams.”

“The team has bought in on how we want to play defense and control the tempo,” Strahan said.

Two Green Wave players to watch in the WCCA tournament are Taylor and Kaden Batieste. In the past two games against Centreville and Parklane, Taylor totaled 26 points while Batieste obtained 16 points. Batieste said his playing ability could be better for the upcoming tournament on Saturday.

“I think my scoring, defense and rebounding could be better, too,” Batieste said. “I’m just trying to help the team the best that I can.”

For the Wilkinson County Christian Academy Rams, the week will end with their tournament at home.

Last week and this week, the Rams will have played six games. WCCA began a five-game winning streak after losing 58-44 to the Adams County Christian School Rebels on Dec. 5.

The latest game played was on Dec. 13 where the Rams won 71-21 over Woodlawn Preparatory School. Andrew Sessions led WCCA with 25 points and Roderick Bailey was second on the team with 19 points.

Wilkinson County Christian Academy will play against Baton Rouge Homeschool to begin the tournament. The Rams will finish the tournament with a 1 p.m. game against Acadiana Christian School.

Mayor’s Council: Much accomplished in 2019

NATCHEZ — It has been a little more than a year since Natchez Mayor Darryl Grennell appointed the first... read more