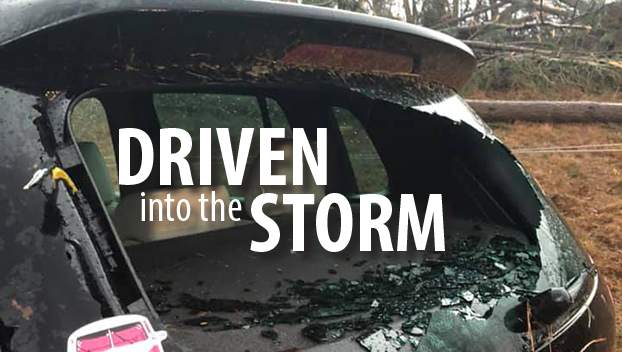 Melanie Miller Downer’s car suffered broken windows and other damage when she drove through a storm Monday afternoon headed to New Orleans. (submitted)

NATCHEZ — A Natchez woman is lucky to be alive today after she was trapped in her car during a storm Monday afternoon while traveling through the countryside on her way to New Orleans.

Melanie Miller Downer said she left Natchez at approximately 2 p.m. Monday to travel to the New Orleans Airport to pick up her son, Miller, who was returning from studying abroad in Manchester England last semester.

“I kept getting storm alerts on (U.S.) 98 telling me to get under cover,” Downer said. “I kept looking at the trees, and the trees were completely clear. The radio was saying it was in Adams County so I thought I was OK.”

When Downer got approximately 5 to 10 miles outside of Summit, which is in Pike County, the weather got really bad really quickly, Downer said

Downer said she and the other drivers pulled over, and Downer put her vehicle in park and hunched down in the driver’s seat with her hands over her head.

“I could hear things hitting the car,” Downer said. “It was like a vacuum in my car. It only lasted like maybe 30 seconds, and things whished by, and (the storm) went by but it was still raining and hailing. I looked around to see power lines down. The truck behind me went around me and pulled into a ditch.”

The wind burst the back window out of Downer’s 2015 Volkswagen Tiguan, Downer said, damaged a side mirror and dented the bumper.

Downer said a young woman who had been driving the car in front of her had stopped her car and was screaming and crying and the young woman’s car had a damaged windshield and dents from the debris.

“I rolled down my window told her to get it the back of my car,” Downer said.

Meanwhile, Downer said she called 911 to report the storm and damage and the dispatcher said she would send a sheriff’s deputy.

Downer said limbs were scattered around the roadway and a 2-by-4 board with nails sticking out, presumably from a power line, was lying nearby.

“The sheriff’s office from Brookhaven called me and said they were on their way and asked if we needed an ambulance,” Downer said. “I looked up and saw the guy two cars in front of me and the tree had knocked the hood off the truck.”

The driver of the damaged pickup truck was covered in dirt and mud and had gotten into the other truck that had pulled off by the ditch, Downer said, and both of the drivers were OK.

“I told him (the sheriff’s deputy) we didn’t need an ambulance,” Downer said.

While she was waiting for the sheriff’s office, Downer said she called her insurance company, which took her information and arranged a rental car for her.

Some people came to help the young woman who had been driving in front of Downer, and after the sheriff’s office arrived, Downer said she continued on her way to New Orleans traveling back roads that she remembers driving as a teenager growing up in McComb.

“I finally found a sign that said Kentwood, and it spit me out around the (I-55) Tangipahoa exit,” Downer said.

By the time she arrive at the New Orleans Airport, Downer said she was approximately an hour late but all was well, because her son’s flight had been delayed as it had been rerouted around the storms.

“It has been a tough year,” Downer said. “I just think nothing else can happen and then something like this happens. I survived it. I guess there are some good things I’m needed for and things I need to do and take care of and try to make the world a better place.”

NATCHEZ — City of Natchez officials appointed Bryan Callaway to be the next city prosecutor Wednesday during a special-called board... read more