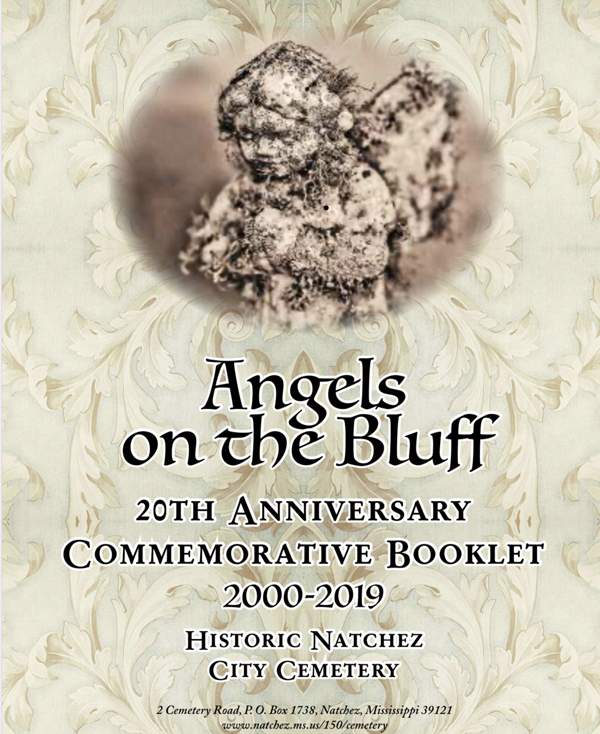 ‘Angels on The Bluff’ books are available for $10 each at Mrs. Holder’s Antiques and The Nest, both on Franklin Street, and at the Natchez City Cemetery office at 2 Cemetery Road. (Submitted photo)

NATCHEZ — Angels on the Bluff recently completed its 20th year of presenting the stories of people who are buried in the Natchez City Cemetery.

The annual event brings hundreds of people to Natchez each year to see local actors and tour guides bring to life the people who are buried in the cemetery.

For the past 20 years, the portrayals have included deceased people dating back to 1790.

In recognition of the event’s 20th anniversary, a collection of all the characters raised from the dead during the past 20 years of Angels on the Bluff have been complied into a book.

“Our beautifully illustrated ‘Angels on the Bluff 20th Anniversary Commemorative Booklet’ is still available,” said Teri Tillman of the Natchez City Cemetery office. “What a wonderful gift idea for family and friends who love Natchez history. The booklet recaps every venue featured on the tour for the past 20 years. Color-coded maps marking the burial spots of all the ‘Angels’ whose stories have been told are also included.”

Booklets are available for $10 each at Mrs. Holder’s Antiques and The Nest, both on Franklin Street, and at the Natchez City Cemetery office (2 Cemetery Road).

The booklets can also be ordered from the cemetery by mail by sending a check or money order in the amount of $15 to Natchez City Cemetery, P.O. Box 1738, Natchez, MS 39121.

All proceeds go toward the preservation of the Natchez City Cemetery.

NATCHEZ — Approximately 15 years ago, Joe Good said the neighborhood around his and his wife Dianne’s house seemed like... read more