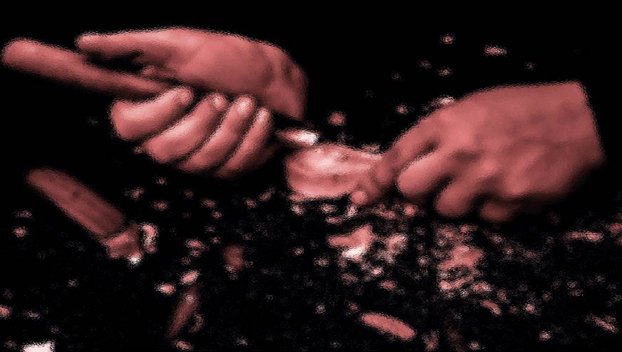 Tom, don’t forget the presents on the back seat,” Mom said to me as we unloaded Christmas ornaments, gifts and goodies. As I hauled in the stuff, Mom stood at the back door scratching her head.

“Forget your key?” I asked.

“No,” she said, showing her key. “Where’s the bell? It’s not here. He’s so regular each year in leaving a bell. Hmmmm.”

The bells were a tradition in our neighborhood. Each year our neighbor “Capt. Jack” would leave a small wooden bell on our doorstep and the doorsteps of our neighbors. Each year, we hung each new bell on our Christmas trees along with the others he gave us over the years. We often joked that if Capt. Jack lived long enough we’d have more bells than tree.

But not this year it seemed.

“Helen?” Mom asked into the phone to our neighbor. “Did you find your bell?”

And so it went that afternoon with Mom’s calls to other neighbors. No bells. Not even a note.

“Capt. Jack” as we came to call him is actually Air Force Capt. John A. Lewis. He grew up in our little Mississippi town and enlisted in the military in World War II just after the bombing of Pearl Harbor. He was a pilot on a bomber flying over German territory when his plane was shot down and he was captured by the Germans. He lived a year as their prisoner of war. He told me all this one morning when I asked to interview him for a school book report on a local hero. He said he couldn’t talk about the “tough stuff.” “Not for young ears to hear,” He showed his curled hands from the cold in the camps, and a little bell he carved out of a wood from the plank he slept on. “Managed to work a nail from the bed as a carving tool. Funny thing about wood bells…don’t make much noise. I never put in a clapper. Afraid I’d get shot if it made a sound.” At that he gave out a belly laugh.

Capt. Jack said that in the camp he made a promise to God that if he ever got out and came home, he’d share his freedom. He said he chose to make little bells, his symbols of freedom. “Remember,” he said. “We have the Liberty Bell. Well this is my liberty bell.”

I returned off and on to help Capt. Jack with errands and such. But most of all to listen to him tell his stories. I eventually did hear the things “not for young ears.” He was right. Sometimes I’d cry in my pillow at night remembering his stories about the Nazi concentration camps.

“The walking dead,” he would say somberly.

So without fail for as long as I can remember, Capt. Jack’s “Liberty Bells” would show up on our doorstep the day after Thanksgiving. Mom usually said, “We can’t put up the tree without our new bell.”

Today, no bell. No bell for us, nor any of the other dozen or so neighbors who also had become accustomed to their gift.

“You know, it’s strange,” Mom told Helen on the phone. “As I passed his house yesterday, I didn’t see his car in the driveway. Tom and I are going over this afternoon to take a look.”

We rolled up to Capt. Jack’s house, and saw newspapers on his front porch and mail in his box.

My stomach tensed as I ran around the house looking into the windows. It was dark inside. Dread gripped me. Mom phoned the police. “We think we’ve found him,” an officer said. “A few days ago, a man fitting his description was found in his car in a ditch just off the highway a few miles from here. He’s at County General. He’s in rough shape.”

We arrived in twenty minutes at County General, and my mom explained to the staff that we were neighbors and friends. “More like family,” she said.

“He’s asleep and had some pain meds,” the nurse said. “He might wake up soon, but he’s been through a lot.”

I gasped when I saw Capt. Jack. A cast encased his leg; machines clicked and clacked; liquids dripped into his arm; and other machines kept electronic watch on Capt. Jack.

And so I did. His hand was still and a chilly. I slipped into a chair next to his bed still holding his hand. Mom stepped out to talk with the doctor and the nurse. I could overhear phrases “had an accident,” “tough shape,” “won’t leave soon.”

He explained that he ran out of wood for the bells and decided to buy more at the store when his car slipped on wet pavement and drove into the ditch. “Guess I’m kinda broken up, but as soon as I get outa here …”

“You’re going to stay right here and rest,” Mom said. “And don’t you worry one bit about the bells. We can do without them this year.”

Capt. Jack drifted to sleep, and Mom and I left. On the way home, Mom said, “I feel so bad for him; he seems so frail.”

For the rest of the ride home, I began to make plans. I’d get some wood, my Scout knife, and as best I could, I’d make those bells. I set a space in my room and began carving. My first attempt was terrible. It didn’t even look like a bell. For hours I kept at it, saying to myself, “Capt. Jack, I got your back.”

For the next few nights, I’d carve and carve. My bells were nothing like Capt. Jack’s but at least began to look more like bells. Mom visited Capt. Jack in the hospital. It seemed he wasn’t doing well. “He survived the prison camps; he’ll be home soon,” I told her.

And so I launched into making bells for everyone in the neighborhood, and even one for Capt. Jack for when we visited him. Let me tell you, carving isn’t as easy as it seems. I realized how hard creating all these bells over the years must have been difficult for Capt. Jack, especially with his infirmed hands.

Finally, I finished all the bells, put them in a red sack and delivered them neighbor to neighbor the morning before Christmas. I even put a little red bow around them like Capt. Jack did.

I returned home and my mom had a special breakfast waiting.

“You’re one special kid,” she said.

“I learned from the best,” I said.

The phone rang. The hospital.

“We’ll be there right away,” she said.

On the way, she explained that Capt. Jack was in trouble … his heart. At the hospital, I ran to Capt. Jack’s room. “He’s not here, Mom,” I called out. She said, “They took him to the operating room. It seems he needed emergency surgery.”

We sat there next to Capt. Jack’s bed where just days ago, I had held his hand, feeling emotions I never knew I had. I knew one thing. I wasn’t going to leave the hospital without seeing Capt. Jack.

“Your mom went home; we told her you could stay,” a nurse said. “What would you like to eat?”

Staff came and went, fixing Capt. Jack’s bed as if he would return and snuggle right into the clean sheets and blankets. The machines, so noisy before, were quiet. I tried not to think of the worst. I remember what I told my mom. “He survived the prison camp.”

I slid into sleep again as Christmas Eve blended into Christmas morning. The sounds of machines jolted me awake.

He grinned. “I survived the prison camp. A little accident can’t stop this old fella.”

I reached out eagerly and grabbed his hand and he returned my grasp.

“Were you here all night?” he asked.

“And the day before,” Mom said as she arrived. “He’s been a nervous wreck. As we all have been.”

At that moment more than a dozen neighbors arrived with cards, gifts, and more. “You know, Capt. Jack, it’s Christmas morning.”

Neighbors opened their hands to reveal the bells I had crudely crafted.

Mom nodded at me. Capt. Jack turned to me. “You did that?” I grinned wide. He squeezed my hand. “Thank you, Tom. Thank you.”

He looked to the neighbors, tears in his eyes. “I don’t know how to thank you.”

“Just get better, Jack. We miss you,” Mom said.

Capt. Jack did get better, and returned to his house. He needed nursing help. I visited as often as I could and learned how to make the bells the Capt. Jack way. During my high school years, he and I delivered them on schedule. I also learned more and more about his time in World War II. In a way, he gave me a treasure of memories before he passed away before I headed to college. At Capt. Jack’s funeral, neighbors came, bells in hand, to send Capt. Jack to his heavenly reward.

So now, every Christmas season, no matter where I am, I gather wood, get my carving kit and make a little space where I can create the bells. I bring them to friends, family, neighbors, just about anyone. On the back I write, “From Capt. Jack. Merry Christmas.”

Each year for the past twenty years, local author G. MARK LAFRANCIS has written an original Christmas story and offered it first to our readers. Please enjoy this year’s story, “THE CHRISTMAS BELLS.” This story is fictional.

Carpenter humbled to be part of Natchez holiday tradition

Todd Carpenter thinks there’s nothing quite like a Natchez Christmas. Originally from Tuscaloosa, Alabama, Carpenter moved to Natchez in his... read more