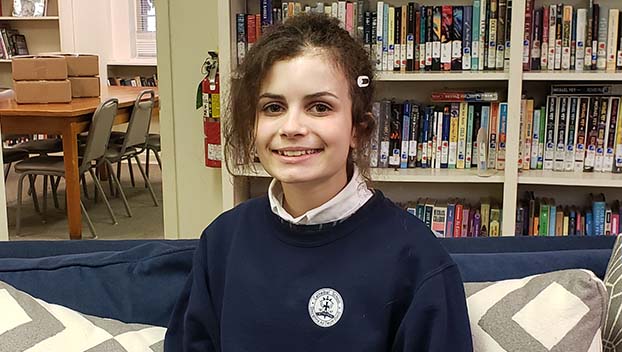 Annabella Laird will have her second shot in the state spelling bee next month in Jackson after placing second in district. Laird is the daughter of Allen and Melinda Laird. (Sabrina Robertson / The Natchez Democrat)

Bright Future: Cathedral eighth-grader gets another shot at spelling title

NATCHEZ — A Cathedral Middle School eighth-grader will have her second shot in the state spelling bee next month in Jackson after placing second in district.

“This isn’t my first time, so I knew how to prepare,” said Annabella Laird, the daughter of Allen and Melinda Laird.

Regardless of having faced the challenge before, when Laird stood in front of a team of judges a few weeks ago at Oak Forest Academy the nerves still hit her, she said.

“It was very stressful to watch … there’s no noise except from the person who is saying and spelling the words,” Laird said. “… It wasn’t that difficult. The one I lost on was ‘legislature’ but that is only because I messed up. I know how to spell it but I dropped the ‘I.’”

Laird said the buildup for the state bee is even more nerve raking. Instead of facing eight challengers from the district, Laird said she would face-off with approximately 30 students from schools across the state in a formal and televised event.

To prepare, Laird said she takes the one-inch thick packet of words provided and memorizes each one she isn’t familiar with by copying them down, some of which are French or Spanish.

“It’s so much more difficult because the words are just that much harder,” she said. “… They give you a packet with all of the words they might call out and we just studied that the whole way to the district bee. They use the same packet for state. There are probably well over 500 words in that packet. I don’t know exactly how many but it was a lot of words.”

Despite the nerves, Laird said the bee is something she enjoys doing and she is glad for the opportunity to do it again.

“Spelling has always been my best subject back when we still had spelling class,” she said. “I think it’s fun. I read a lot and I enjoy it.”

NATCHEZ — Dallin Blanks said out of the three pets he and his mother, Annette Tyler, own, a dog named... read more