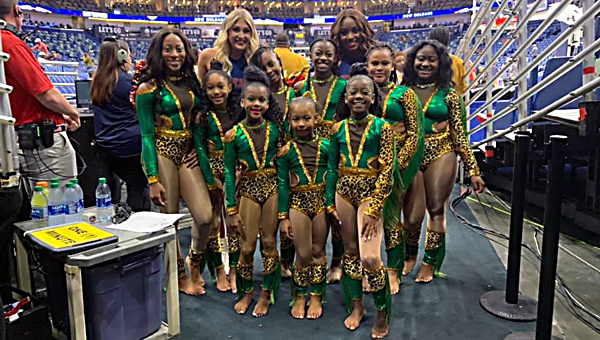 NATCHEZ — Some Natchez dancers between ages 5 and 17 years old traveled to New Orleans last weekend to perform in the Pelicans Pre-Game show.

“They were just thrilled,” said Emerald Elites coach, India Martin. “Most of them knew it was a once in a lifetime opportunity to have at such a young age and wanted to go.”

The girls, D’Nya White-Smith, Chloe Johnson, DeAsia Fleming, A’Mya Hoggatt, Taraji Richardson, CaMya Webster, Tiana James, Skylar Frazier and Alyssa Colvin were able to do a warm up with a mini rehearsal but there was no chance for a full floor rehearsal before the big show, Martin said. Even so, the event went smoothly and the crowds were pleased, she said.

Martin said the girls each received a Pelicans T-shirt and met the players as a reward for their hard work.

“They’re all honor roll students required to keep a 3.0 grade point average to be on the team,” Martin said. “I want them to be leaders in the community as well as on the dance floor. … We usually have three hour practices two or three days a week.”

The Emerald Elites team is comprised of children between five and 17 years old from various schools. Participants are required to turn in progress reports and report cards within a week of receiving them to prove they have maintained a 3.0-grade point average in order to participate, Martin said.

Martin said she plans to take the team back to New Orleans in April.

“My next plan is to get them at another college game and at an NFL game,” Martin said.

Happy New Year! Fireworks usher in 2020 in the Miss-Lou