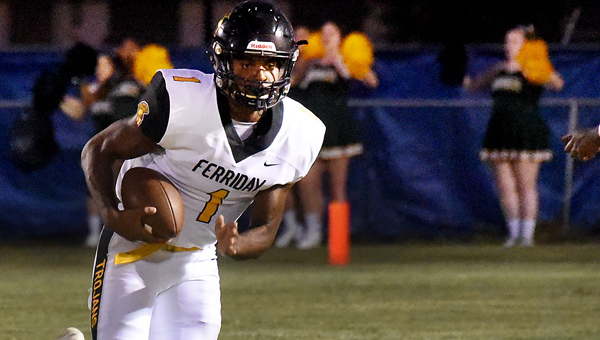 Ferriday High School Trojans Quarterback Kobe Dillon runs the ball in a game earlier this season. Dillon ran the ball 106 times last season for a total of 1,386 yards and 23 touchdowns. He completed 112 of 187 passes for 1,938 yards with 21 touchdowns and led his team to the state championship title. (File Photo, The Natchez Democrat)

2019 All Metro Player of the year: Kobe Dillon

“It’s a great accomplishment to be named All-Metro Football Player of the Year,” Dillon said. “I never thought it would happen. I had a great season, stayed locked-in and went out and competed well because it was my senior year.”

Being named All-Metro was not the only honor Dillon took home this season. Dillon was named the Offensive MVP in the Class 2A Louisiana High School Athletics Association State Championship game. Dillon said he also earned LHSAA District 2-2A First Team Quarterback, Merit Health Player of The Year and Beast of the Week for his athletic ability during the season.

Leading up to the Class 2A state championship game, Dillon said he and Kenny Kitchen, the Offensive Coordinator for the Trojans, studied film. Dillon added the studying of his film paid off in the championship game.

“When I first stepped onto the turf for warm ups, I felt all of the energy from the fans in the stands,” Dillon said. “I also thought this was going to be the greatest game in my life. It turned out it would be just that.”

In total this season for the Trojans as quarterback Dillon completed 112 out of 187 passes for 1,938 passing yards with 21 touchdowns. Dillon also ran the ball 106 times for 1,386 yards and 23 touchdowns.

“He’s able to run the ball and throw the ball and was able to make the right reads and put the ball in the right player’s hands at the right time,” Smith said. “We put a lot on him this season. He was able to step up to the plate and lead us to a championship this year. I will be forever grateful. I think this is a lifetime achievement for him, being the starting quarterback and winning the state championship.”