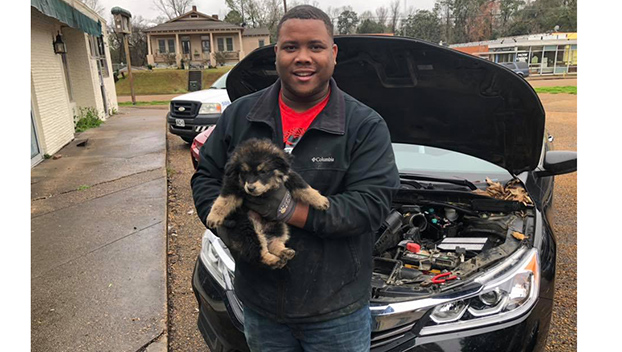 Kaldrick Tenner holds the puppy he rescued from inside a friend’s car Friday morning. (Submitted photo)

NATCHEZ — One Natchez man started his new year right by saving a life.

When Kaldrick Tenner received a phone call from a friend in distress, little did he know he would spend more than an hour taking apart a car engine to rescue a puppy trapped inside.

“I got a call from a friend,” Tenner said Friday evening. “She was hearing a puppy cry, but didn’t know where it was coming from.”

Tenner said when he arrived to help his friend Friday morning, he too heard the puppy crying, but couldn’t pinpoint the little dog’s location.

“I was looking and looking, and then another friend saw it,” Tenner said.

Deep inside the engine of his friend’s Honda Accord sat the puppy, Tenner said.

“Once I saw where it was, I started taking pieces of the car apart until I got to the puppy,” Tenner said.

Apparently, the two- to three-month-old female dog rode inside the engine, while his friend drove more than 40 miles from Union Church to Natchez, Tenner said.

“She was coming to Natchez for an appointment,” Tenner said.

A self-employed commercial truck driver, Tenner had plenty of experience with working on engines.

“I took out the fuse box and took out the air filter box from under the motor before I could get to the puppy,” Tenner said. “I didn’t want to see the puppy die, so I took my time and got it.”

Tenner said it took him close to an hour to rescue the puppy from the car.

“Thankfully, the puppy wasn’t harmed. It had a scratch, and that was it,” Tenner said.

After the rescue, Tenner said he and his friend gave the puppy to the animal shelter on Liberty Road.

“I already have a dog and couldn’t take her home,” Tenner said.

Natchez Animal Control Officer Randy Myer was on the scene when Tenner pulled the little dog out of the car.

Tenner said because the dog was on private property, Myers was unable to help with the rescue. But after watching the rescue, Myers did congratulate Tenner with a post on Facebook.

“Cheers to Kaldrick Tenner for rescuing this puppy. Took lots of engine loose to get her. And let’s hope he can get his girlfriend’s car back together,” Myers wrote.