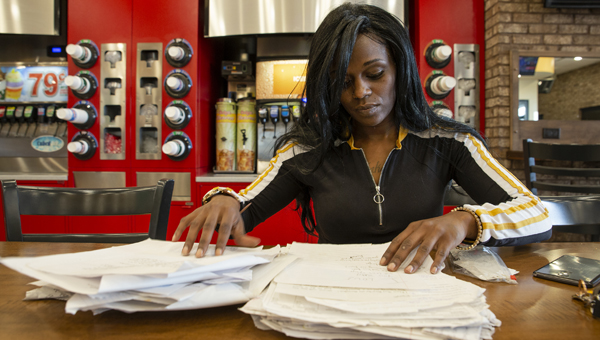 Tiarra Deal sifts through receipts she received from correctional officers at the restitution center in exchange for her paychecks. At her job at a Sonic Drive-In in Brandon, Deal made $8.25 an hour. (Eric J. Shelton, Mississippi Today/Report for America)

Want out of jail? First you have to take a fast-food job

This investigation was published in partnership with The Marshall Project, Mississippi Today, USA TODAY Network and the Jackson Clarion-Ledger.

The Mississippi Center for Investigative Reporting is a nonprofit newsroom that exposes corruption and injustices, shines a light into the darkness and raises up a new generation of investigative reporters. Sign up for their newsletters here.

By Anna Wolfe and Michelle Liu

JACKSON — During her shifts at a Church’s Chicken, Annita Husband looked like the other employees. She wore the same blue and red polo shirt, greeted the same customers, and slung the same fried chicken and biscuits.

But after clocking out, Husband, a mother in her 40s, had to wait for a white van with barred windows and the seal of the Mississippi Department of Corrections on its sides. It delivered her to the Flowood Restitution Center, a motel converted into a jail surrounded by razor wire. Here, Husband slept in a room with seven other women, sharing a mirror to get ready in the mornings, enduring strip searches for contraband at night.

A judge sentenced Husband to the restitution center in 2015 to pay off almost $13,000 she owed from an embezzlement conviction in 2009. The corrections department would not release her until she earned enough money at her $7.25-an-hour part-time job to clear her debts and cover $11 a day for “room and board” at Flowood.

The corrections department took her paychecks, she said, giving her back just $10 a week — all in quarters — so she could buy things like soap and deodorant.

The State of Mississippi had locked Husband into a modern-day debtor’s prison.

Mississippi appears to be the only state where judges lock people up for an indefinite time while they work to earn money to pay off court-ordered debts. While there is no comprehensive data, legal experts who study fines, fees and restitution say Mississippi is unusual at the very least.

“We don’t know of any other states that have a program quite like Mississippi’s,” said Sharon Brett, a senior staff attorney with Harvard’s Criminal Justice Policy Program.

Judges have sentenced hundreds of people a year to four restitution centers around the state, ordering the inmates to stay until they pay off court fees, fines and restitution to victims, according to four years of government records analyzed by Mississippi Today and The Marshall Project.

People sent to the centers had been sentenced for felonies but didn’t commit violent crimes, according to the program rules. When we tracked down the cases of more than 200 people confined there on January 1, 2019, we found they didn’t usually owe a lot of money. Half the people living in the centers had debts of less than $3,515. One owed just $656.50.

But inmates spent an average of nearly four months—and up to five years—at the centers, working for private employers to earn enough to satisfy the courts. Meanwhile their costs continued to balloon, since they had to pay for room and board, transportation to their jobs, and medical care.

Many states are reconsidering the practice of jailing the poor, especially because of its inordinate impact on people of color. Since 2018, Mississippi has required judges to find that people willfully failed to make court-ordered payments before sending them to jail or prison.

But that hasn’t affected the number of people entering Mississippi’s restitution-center program, which our reporting shows mostly affects those on probation for low-level offenses related to drug addiction or poverty.

Mississippi Today reviewed hundreds of documents, spoke with more than 50 current and former restitution-center inmates and interviewed legal experts over the course of 14 months.

Our investigation with The Marshall Project found:

* Black people are overrepresented at restitution centers, accounting for 49 percent of inmates, compared with 38 percent of the state population, according to our analysis of center data for January 2019. More than 60 percent of people in prison in Mississippi are black.

* The inmates work at low-wage, sometimes dangerous jobs, such as slaughtering chickens or gutting catfish at processing plants. Private citizens hire them to work as handymen and landscapers at their homes.

* When inmates can’t get jobs, sometimes for medical reasons, they sit in the centers, accruing $330 a month in room and board costs.

* Just a quarter of all money earned by the inmates went to pay restitution, with the remainder going to the corrections department and the courts, according to state data from July 2014 through June 2018. In some cases, the courts added unrelated debts, such as child support. One man’s charge for meth possession turned into debt totaling $72,500.

* Inaccurate and confusing record-keeping by the state makes it hard for inmates to know if they are making progress toward paying off their debts and how soon they might be eligible for release.

The Mississippi Department of Corrections, or MDOC, repeatedly declined our requests to visit the restitution centers and to discuss them with state officials. But in a statement issued in late December in response to our findings, the department noted that it follows state law when operating the restitution program.

Emphasizing that judges are in charge of sending people to the centers, the statement says the program “provides an alternative to incarceration for minimal risk offenders by facilitating their transition to the community.”

“While individuals in this program are required to work, the MDOC does not force them to work,” the statement says. “The MDOC merely assists them in finding employment.”

The state has a long history of forcing prisoners — especially black men — to work. After slavery was abolished, Mississippi leased a soaring number of prisoners to private industry. Public outcry over deaths and mistreatment forced the state to end that program in 1890. Mississippi then founded the state penitentiary known as Parchman Farm, which was modeled after a slave plantation. It still houses over 3,000 of the state’s 21,000 prisoners.

The restitution-center program has unfortunate parallels with Mississippi’s past, said Alex Lichtenstein, a historian who has written a book on convict leasing in the South. “It’s a form of penal labor, there’s no question about it.”

Today, employers benefit from access to cheap and reliable labor from the restitution program. “If it weren’t for the restitution center, I would seriously have trouble running my business,” said Barry Porter, the owner of a Sonic Drive-In near Jackson.

Some judges say the program helps those sentenced to it. Charles Webster, a circuit judge in Clarksdale, said that the program teaches them about responsibility by requiring them to show up for work and meet financial obligations. He had sentenced two of the people in the centers in January 2019.

“Going to the restitution center’s better than going to prison, I would think,” he said.

Our review of orders for more than 200 people revealed that judges sent about 80 percent to a center for violating the terms of their probation. In 16 orders, the only violation listed was the defendant’s failure to pay. Almost all of the inmates were given a specific amount of money they must earn before their release. In 15 cases we found, the judges sentenced defendants to the restitution centers for an amount of money and  a time limit of 90 days to three years.

In 15 cases we found, the judges sentenced defendants to the restitution centers for an amount of money and  a limit of 90 days.

While Husband was at the restitution center, the state didn’t call her an inmate (it uses the word “resident”), and she did not have to wear a striped prison uniform. Flowood does house women finishing prison sentences who perform community service for government agencies and local charities.

But Husband and the 36 other women at the Flowood restitution center at the time slept on the same prison-issued mattresses, ate the same food, and had to follow most of the same restrictions as the other prisoners. Even when they’re at work, restitution program inmates are not allowed to see friends or family, talk on the phone or smoke cigarettes.

As an inmate makes money, the corrections department takes the first cut in room and board, then usually holds the remaining earnings until there’s enough to pay the entire debt. When someone leaves the program, the corrections department sends their earnings to the court to cover its costs. It distributes the rest to victims, then to pay criminal fines. (In Husband’s case, the payday lender she stole from received just over $600, according to county records.)

At the rate she was earning money, Husband would have spent more than a year and a half in the restitution center working to pay off her debts, according to our analysis of her earnings reports.

But on July 9, 2015, she fled, taking a Greyhound bus back to Biloxi. Officers picked her up about six months later, and a  judge sentenced her to her original prison term. She spent almost 10 months at Central Mississippi Correctional Facility in rural Rankin County.

That’s about half as long as she would have spent at the restitution center.

In the years after she left prison, Husband said, she met with her parole officer each month and paid what she could, usually $20 a visit. Now 52, she works two jobs as a hotel housekeeper, she said, earning about $25,000 a year for 55 to 60 hours of work every week.

Looking back, Husband says she was punished for being poor, saddled with debts she could never repay.

In the restitution center, “You’re there without an end. You do not know when you’re getting out, when you’re going to be finished,” she said. “That’s torture.”

Anna Wolfe is an investigative reporter who writes about poverty and economic justice for Mississippi Today, an independent nonprofit newsroom.

Michelle Liu has covered criminal justice issues for Mississippi Today through the Report for America initiative since June 2018.

Andrew R. Calderón is a data reporter for The Marshall Project.

County trash back on schedule

NATCHEZ — Trash pick-up in Adams County should be back on a regular schedule now that the Christmas and New... read more