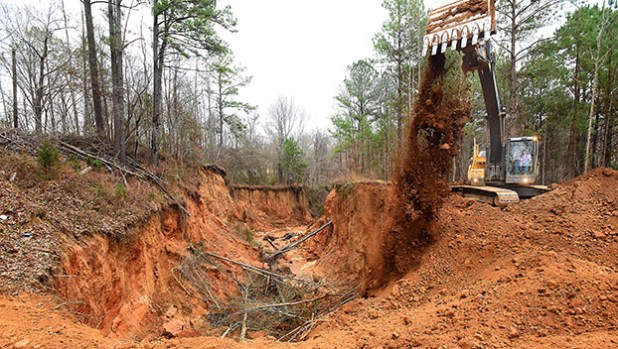 Contractor Eddie Beach, about, moves dirt to redirect a spillway for the lake near Turkey Creek Road. (Ben Hillyer / The Natchez Democrat) 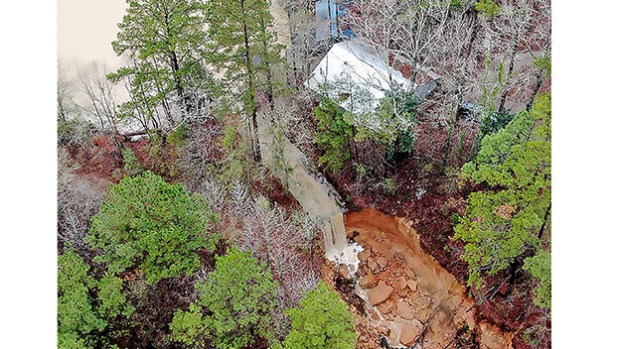 A drone photo taken before the dirtwork provided by William McKercher shows how the overflow of the lake was eroding away the land near DeeAnne Whitehead’s house. (submitted) 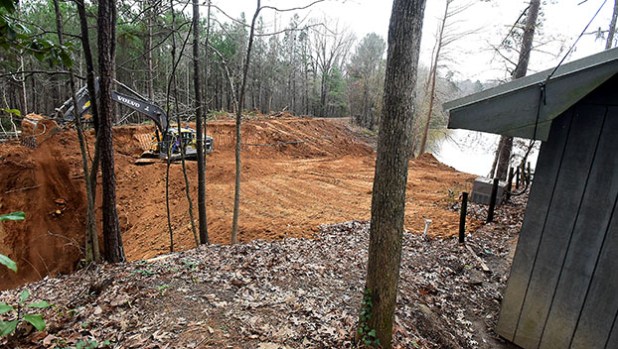 Contractor Eddie Beach fills the area eroded by DeeAnne Whitehead’s house at the end of Turkey Creek Road in Adams County. The dirtwork was done to redirect the spillway of the lake away from her house. (Ben Hillyer / The Natchez Democrat)

NATCHEZ — When a privately-owned dam overflowed near Turkey Creek Road Friday volunteers stepped up to help prevent DeeAnne Whitehead’s nearby home from flooding.

Adams County District 2 Supervisor Kevin Wilson said the county and Mississippi Department of Environmental Quality could not legally help because the dam was on private property.

William G. McKercher, the chief of Dam Safety Division of MDEQ, happened to be close by working at a county-owned dam at Robbins Lake when Whitehead called for help, Wilson said.

“Because it’s a private lake and a private dam there wasn’t a whole lot they could do,” Wilson said. “(A friend) wound up calling Eddie Beach, the owner of Midway Construction, and he came up with a plan. Eddie said he would actually do it for free, thinking it would only take a couple of hours to cut the levee and drain some of the water off to keep it from blowing the dam out and taking the house away with it.”

Whitehead said her friend and neighbor, David Atkins, contacted Beach out of Roxie.

Beach said he arrived in Natchez at 7 a.m. Friday with his equipment and stayed for 10 hours moving dirt to redirect the spillway away from Whitehead’s house.

“I probably moved about 2,500 yards of dirt,” Beach said. “I heard from friends of mine that she was in need, so I went to help.”

Whitehead said she was beyond grateful for the help.

“I feel beyond blessed. It’s a miracle,” Whitehead said. “… If it had not been for Mr. Beach and his generosity, during the next big storm I probably would have at least lost my air conditioner and my generator. The water was coming for my house. It’s a blessing that I could never pay back.”