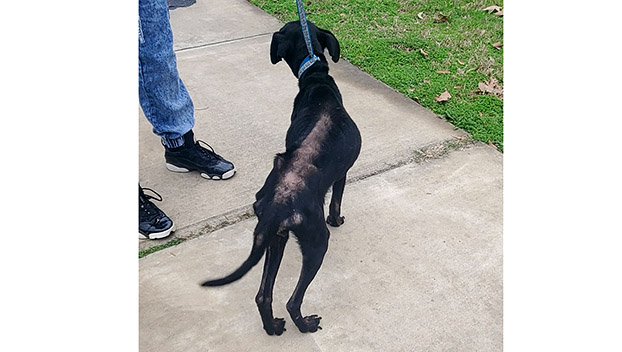 The dog is mid-sized, McKnight said, and weighed 21 pounds when she was brought to the shelter and should have been approximately 35 to 40 pounds based on her size.

The dog also was missing patches of hair on her back near the base of her tail.

“We have her and are trying to treat her missing hair and put weight back on her,” McKnight said. “She is very sweet and social and has shown no sign of aggression or anything like that.”

Natchez Police Chief Walter Armstrong said the dog had been chained up beside a house between Holden Drive and Old Washington Road.

“This animal was chained and had a doghouse and appeared to not be properly cared for based on its size,” Armstrong said. “That is what prompted Animal Control to take possession of this animal. … There were no marks or any signs of beating.”

Officials declined to name the dog’s owner because the investigation is ongoing.

“The owner could be subject to charges pending the outcome of this investigation, which would require a veterinarian examination,” Armstrong said. “That is in the works. What is apparent is that the animal has not been properly fed. Whether this is a result of a medical issue or neglect has to be determined by a medical professional.”

Photos of the dog drew a lot of attention on social media over the past week and prompted Humane Society directors to revisit with local officials about an amended animal control ordinance, Natchez Mayor Darryl Grennell said.

The ordinance would require pets to be spayed or neutered or would require breeders to purchase an annual permit. Officials said the goal of the ordinance is to curtail the unwanted pet population and prevent animals from running at large or from becoming neglected.

Grennell said the proposed ordinance would be readdressed during a special-called meeting this week. However, a specific meeting time had not been set as of Friday.

McKnight said the large number of ill animals entering the shelter is the reason there is never room for strays.

“We just feel that people who neglect their animals should be held accountable, period. Whether we get the money back or not, we’ve got to make some sort of statement because we see this happen too much. If they’re not being held responsible, then the problem is just going to continue.”