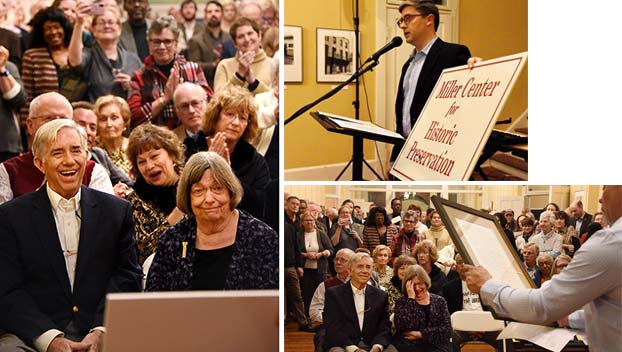 NATCHEZ — The Historic Natchez Foundation announced the creation of a center dedicated to the vision established by former directors Ron and Mimi Miller.

Friday’s unveiling of the Miller Center for Historic Preservation culminated an evening that celebrated the work of the Millers, who came to Natchez in the 1970s and devoted their lives to the area. The celebration was part of HNF’s annual meeting at his headquarters on Commerce Street.

“From creating the foundation to saving buildings around town, professionally and personally, to events like the balloon festival, formerly known as the balloon race, their fingerprints are all over Natchez and it is the better for it,”  Executive Director Carter Burns said.

The celebration also included a presentation of a key to the city to the Millers by Natchez Mayor Darryl Grennell.

Burns said the new center will be the research arm of the Historic Natchez Foundation. The center will conduct scholarly research, create publications, host scholars and organize lectures, conferences and special events.

“It will continue the work of the Millers to discover, document and preserve all aspects of Natchez history,” Burns said.

Ron Miller served as director of the foundation for approximately 30 years, starting in 1979. Mimi Miller took over as executive director in 2008, when her husband went to the Gulf Coast to work for the Mississippi Department of Archives and History. Mimi Miller retired in 2018 after Burns was hired as director.

NATCHEZ — For the past four years, members of the Adah Grand Chapter Order of the Eastern Star Masonic organization... read more