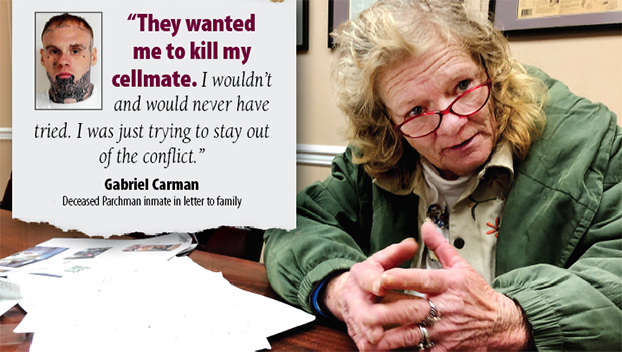 Ruby Carman discusses the letter her son Gabriel Carman wrote before he was found dead Saturday at the Mississippi State Penitentiary at Parchman. (Scott Hawkins | The Natchez Democrat)

NATCHEZ — Family members of an Adams County man who was found hanging inside a cell in the Mississippi State Penitentiary at Parchman and pronounced dead Saturday said he wrote a letter to them on Jan. 6 saying he feared for his life.

“Someone here videoed the chaos,” Gabriel Carman wrote in the letter addressed to his mother, Ruby Carman, referring to a prison uprising earlier this month in Unit 29 of the prison in which three prisoners were killed. “Mom, I am dead when I ever come around any Vice Lords or LK’s (Latin Kings).”

Gabriel explained in the letter that he believed he was captured in a video using derogatory language against the Vice Lords and the video later went viral on social media and was picked up by some media.

“They wanted me to kill my cellmate,” Gabriel wrote. “I wouldn’t and would never have tried. I was just trying to stay out of the conflict.”

Gabriel had been in Parchman for approximately six months, Ruby said, and was in the second year of a 12-year sentence on an unlawful touching of a child conviction.

Ruby said she had reached out to Gabriel’s caseworker about the letter.

“She was real nasty to me because I was telling her about them having a hit on him and stuff and she kept telling me I had to talk to the watch commander,” Ruby said. “I never could get an answer (from the watch commander). I’ve been calling for two weeks up there trying to get something done and Saturday they moved him over by himself.”

Sunflower County Coroner Heather Burton said she received a call at 7:23 p.m. Saturday, Jan. 18, from the Mississippi Department of Corrections Security at Parchman, about the death of an inmate in Unit 29 Holding.

“I arrived at Unit 29 Holding at 8:27 p.m. and began my investigation,” Burton said. “The offender, Gabriel Carman, was found hanging in his cell by two MDOC officers. Offender Carman was last seen personally by the officers at 6:20 p.m. during a security check.”

Burton said the officers told her Carman had been irate and was throwing feces on the wall in the hall.

“At 6:41 p.m., the person that was cleaning the hall alerted the two officers that he was hanging, and they immediately ran to the cell to check on him,” Burton said. “They attempted to enter the cell, but the cell lock was jammed from the inside with a pipe the offender had removed from the toilet.”

Ruby said she believes Gabriel was throwing feces in an effort to protect himself from an attacker.

“Mostly, my mind only thinks of ways to protect myself and how to kill someone else fast because that is the world I live in now,” Gabriel wrote in his Jan. 6 letter. “It is a war, so I have to be ready. What made it worse was the video going viral. I was yelling for them to kill me and the world seen it and a lot of them know me in prison.”

Ruby said she does not believe Gabriel would have killed himself.

“He had tried it (to kill himself) before but he couldn’t do it,” Ruby said.

In his letter, Gabriel expresses a desire to survive.

“I love you mom and just know I will be fighting for me and everyone,” Gabriel wrote. “I’ll never give up. Know that your son is on a mission for survival. Pray for us that are in the fight and for our hedge of protection during this.”

Mississippi Department of Corrections spokeswoman Grace Fisher said she was not aware of the letter.

Burton, however, said the Carman family had shared the letter with her.

Carman’s body has been transported to the State Medical Examiner for autopsy in accordance with state law, and Burton said the official cause of death and manner of death are pending autopsy results.

“I recently saw a protest rally where victims’ families stated they were not advised by MDOC of the details surrounding the death of their loved ones,” Burton said. “I was unaware that they were not given details, so I have personally spoken to Mr. Carman’s parents to express my condolences and offer answers to their questions

Please keep the Carmen family in your prayers, as well as MDOC Staff, inmates, and their families.”

NATCHEZ — In three years, an interlocal agreement between Natchez and Adams County to provide fire protection to their residents... read more