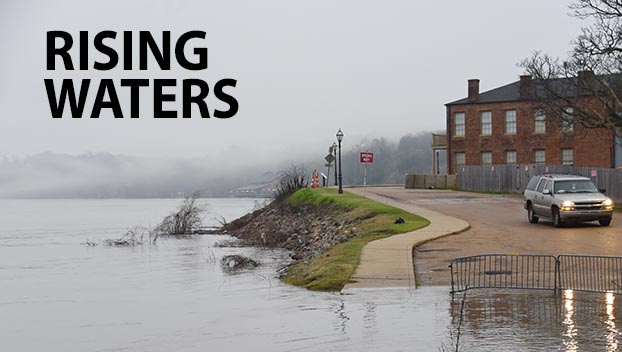 NATCHEZ — Natchez officials said Silver Street will close to through traffic on Friday morning and convert to two-way traffic as the Mississippi River at Natchez is currently at 52.2 feet and is expected to crest at 53 feet on Jan. 28.

Grennell said the road closures have become an annual event in Natchez.

“It really puts us in a situation, because it changes the dynamics of everything,” Grennell said. “Silver Street is converted to a two-way street.”

Grennell said people can continue to travel down Silver Street but must turn around at the low point where barricades are placed with water coming over the road.

Grennell said the river is powerful and people should not try to go past the barricades.

Last year, a pedestrian tried to walk through the barricaded area and got swept away by the floodwaters and his body has yet to be recovered.

“They don’t need to cross those barricades at the end,” Grennell said “That river is no joke. They are supposed to turn around and most people turn around there at Magnolia Grill.”

Marty Pope, senior service hydrologist with the National Weather Service in Jackson, said that if the current 16-day weather projection holds, the river could start falling after the Jan. 28 crest at 53 feet.

“From there it is going to crest out and fall out,” Pope said.

“There are no big bumps of rainfall that are going to affect the Cairo, Illinois, level right now,” Pope said. “The good thing about that for Natchez is we should see the crest of 53 on (Jan.) 28 and from there with the rainfall it is just going to crest out, and it is just going to fall out. In the first 16 days, we should continue to see a falling river unless one of these systems that are out there, maybe the one around Feb. 2 or 3, is heavier than it is expected to be.”