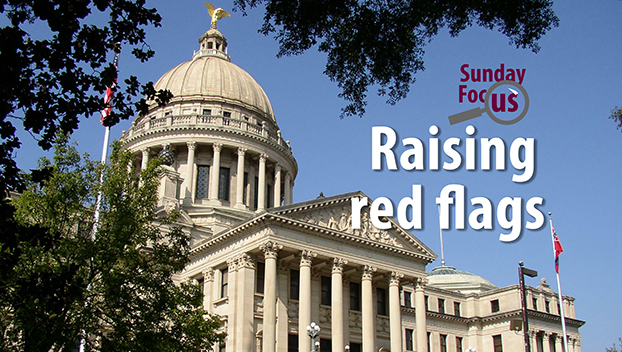 NATCHEZ — Two Mississippi Senators recently introduced a so-called red flag bill that, if approved, would create a procedure to allow family members and law enforcement authorities to use the court system to take guns away from people who are deemed mentally ill or a danger to society.

Virginia currently has had a red flag bill making its way through the state legislature and, in recent days sparked a peaceful protest of armed men surrounding the capitol. The bill passed the Virginia Senate and has advanced to the House of Delegates for consideration.

The courts have not yet tested the legality of those sanctuary communities.

Shortly after Mississippi’s red flag bill was introduced in the Senate as SB-2055 on Jan. 16, DeSoto County supervisors last week voted to declare their county a Second Amendment safe haven even though the bill has not come out of committee and likely will not.

Mississippi’s red flag bill would create a procedure by which family members and law enforcement authorities could work with the chancery courts to take gun rights away from people who are deemed mentally ill or a danger to the community.

“It has no chance (of passing),” said SB-2055 principal author Dist. 11 Sen. Robert L. Jackson, D-Marks, who authored and introduced the bill with Dist. 24 Sen. David Jordan, D-Greenwood. “It would allow for the chancery court to offer proceedings for someone who may have some mental problems to go through a process by which their gun rights may be taken away for a period of time and then it allows courts also to restore those rights once a person is deemed mentally competent enough to possess a firearm.”

Jackson said the Judiciary A committee chairman told him after Jackson filed the bill that it would never see the light of day.

Shortly after SB-2055 was introduced, Dist. 37 Sen. Melanie Sojourner, R-Natchez, posted her opposition to the bill on social media.

“Thank you to everyone who has reached out regarding the Democrat-authored Red Flag Law bill that has been introduced in the MS Senate,” Sojourner wrote in a social media post on Jan. 20. “My thoughts… ‘From my cold dead hands!’ Not today. Not a chance. This bill will not pass in Mississippi. Mississippi is NOT Virginia. Not today. However, it is up to us to make sure it doesn’t become Virginia anytime in the near future.”

Jackson said he did not file the bill in an attempt to take people’s guns away.

“I’m in no means against people’s rights to bear arms,” Jackson said. “I own arms myself, but there are certain people in our society who shouldn’t have access to firearms and that’s who I am trying to protect society from, those people.”

Jackson said he introduced the bill because of shootings throughout the state.

“There are so many senseless murders and shootings occurring in our state,” Jackson said, “especially in our state capital and throughout the state. There needs to be some kind of restraints out there for people who may have some debilitating illness mostly from a mental state is what the bill was trying to get at. It is not an attempt to try and take people’s guns or infringe on their second amendment. It is an attempt to make sense of a senseless situation.”

“You can look at it as a gun control measure, but it is sort of a short cut to addressing some mental health issues,” Johnson said, adding he has not yet seen the bill. “It would seem to me that it would identify people who clearly have some mental health issues if their family members think you should be alarmed about what they are doing with guns.”

While Sojourner said she is a strong proponent of second amendment rights, she believes mental health is an issue Mississippi needs to address.

“I don’t support greater restrictions on the second amendment,” Sojourner said. “I think constantly the mental health discussion is on the table. What needs to be done there and what should be done there are discussions that will come forward that we will have but just to say that we are going to fix all of the mass crimes in this country and we are going to restrict the second amendment, I think is silly and a false premise.”

An Aug. 26, 2019, report by the Pew Charitable Trust found that of the states that had passed red flag laws relied on robust mental health systems in their states.

“Violence prevention experts support the laws but say most of the country’s more than 17,000 local police forces are ill-equipped to identify potential shooters, much less intervene and take their guns away,” Pew trust reports on its website at pewtrusts.org. “They say having officers equipped to make such behavioral threat assessments is key to reducing mass shootings.”

“I think that needs to come through a medical person (determining who is mentally ill),” Armstrong said. “I think maybe we should be able to make a recommendation but to say that someone is not mentally stable, I don’t think we qualify to make that diagnosis, but at the same time, I think we should be able to start the conversation and direct that conversation to the proper person who has the credentials to be able to make that call.”

Armstrong said he has not yet seen Mississippi’s red flag bill and he is not opposed to taking steps to keep guns out of the hands of mentally ill people.

“What we are seeing a lot of times is people who wind up with guns that shouldn’t have had them in the first place,” Armstrong said, “not only the mentally ill but the convicted felons and in some cases underage persons. Those are the three areas that I think need to be the main focus as it relates to the weapons.”

Sojourner said she does not believe laws can prevent people from doing bad things.

“We can pass all the laws we want that restrict people’s gun ownership or people’s second amendment rights, and it is not going to change a person who has an evil heart or evil intentions,” Sojourner said. “We’ve seen mass killings in this country and in others that involved bombs, vehicles, machetes, all sorts of things, including firearms, and we could restrict all day long, fertilizer use and kitchen knives and driving heavy-duty trucks with big bumpers on them but if that equipment or device gets into the hands of a person with an evil heart or evil intention no amount of laws in the world are going to stop them. I’m not for restricting the second amendment anymore than we already have.”

Sojourner said she also believes law enforcement authorities already have much of the power that would be granted by a red flag law.

“They do have some authority to already engage in actions with certain people,” Sojourner said. “Convicted felons can’t have firearms.”

Johnson said he, too, is a supporter of second amendment rights and owns guns himself.

“I would be in support of a bill but not one without any restraints to just go in and take somebody’s guns,” Johnson said, “but one that at least creates a presumption that would allow the law enforcement entity in that area to go in and check that person out and interview that person and investigate them.

Issue is not going away

Even though SB-2055 will likely not see the light of day, Johnson said he believes lawmakers must make some attempt to deal with the state’s mental health issues.

“In lieu of a red flag bill,” Johnson said, “let’s put more money into mental health. Let’s have, instead of a family member calling law enforcement, and saying, ‘Go check this person out who has guns.’ Maybe, if they had a facility in that area, that person could take advantage of it. That at least would be something you could do in lieu of that. … I think (the red flag bill) is a great attempt at addressing an issue that we won’t put the requisite amount of money in the mental health system to do but we ought to do.

Sojourner said it comes down to human behavior.

Jackson said he hopes the bill will help open a discussion on the topic.

“It (SB-2055) has no chance,” Jackson said, “but we still need to look at this and debate the issue and try to come to some kind of reasonable agreement that something needs to be done to restrain guns owned by people who may have some mental disorder.”