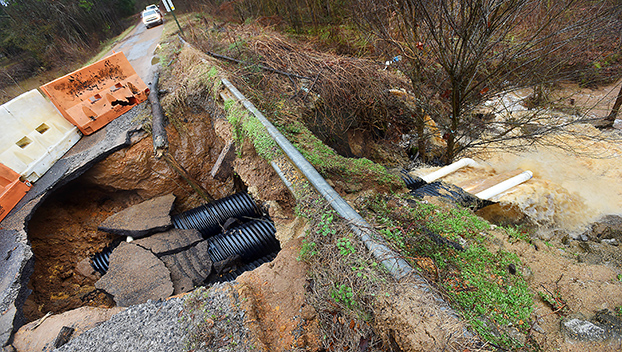 The sloughed off portion of Robins Lake dam exposed the outflow pipes and a water main to area houses. (Ben Hillyer / The Natchez Democrat)

NATCHEZ — Newly elected officials hit a roadblock when it comes to finding a permanent fix for recurring flooding issues at Robins Lake Road.

The county road sits on a privately owned dam that is not eligible for federal funds and fixing it is a $1.2 million project, officials said.

Tuesday’s meeting of the Adams County Board of Supervisors was recessed until Friday morning so the board could readdress several flooding and erosion problems, particularly that of the road on the Robins Lake levee.

A rainstorm earlier this month caused the road to slough off and expose some of the culverts inside the dam.

During Friday’s meeting, Adams County Road Manager Robbie Dollar said he received a letter from the Natural Resources Conservation Service that stated the project is not eligible for Emergency Watershed Protection Program funds because it involves rebuilding a dam that is privately owned.

The dam was built by Bill Beane in the 1970s and the county later adopted the road above the dam and only has control of its surface, officials said.

“Honestly, that dam would have never been approved today,” Dollar said of the previous supervisors’ decision to adopt the road.

A similar break in the road occurred approximately 5 years ago in the same location and the county repacked the dam and fixed the road, Dollar said.

“As of right now, if MDEQ will let us pack the pipes that are showing and build the road back, we could go from there,” Dollar said, offering a similar solution to the repairs done a few years prior.

Hayden Kaiser III, owner of Jordan Kaiser & Sessions LLC, said the 50-acre lake holds too much water for the small dam and the issue would only happen again.

“The structure is not nearly enough to handle even a 25-year storm. Even if we add another culvert, it would take about four more,” Kaiser said.

There is a separate drain built on the opposite side of the lake that still doesn’t prevent the water from topping the levee after a heavy rain, Kaiser said.

The repairs recommended by the Dam Safety Division of the Mississippi Department of Environmental Quality would cost a minimum of $1.2 million, Kaiser said.

“It’s just a major construction item,” Kaiser said, adding their recommendation would involve tearing out the road and rebuilding the dam entirely.

Kaiser said a dam breach analysis would be required to assess the risk level if the dam were to collapse. Approximately 15 to 20 residents are situated below the dam.

“Right now it is most likely going to classify as a high hazard dam because it has a breach and there are houses downstream,” he said.

Kaiser said a better solution might be to remove the dam and replace it with a box culvert.

“My recommendation, if you want to keep the road open, is to do away with the dam completely,” he said.

The supervisors said tampering with the dam could cause a lawsuit because the county doesn’t own rights to it.

“Any way we go could be a lawsuit,” said Scott Slover, the board attorney.

Another option would be to drain and lower the level of the lake, Dollar said, adding tampering with the water level also might not suit neighboring residents.

In a flooding event approximately 10 years ago, Dollar said the state ordered the county to lower the water level 17 feet below the top of the levee.

Kaiser suggested that he contact MDEQ and come back to the Board of Supervisors later with an update of what they could do next to repair the levee.

District 2 Supervisor Kevin Wilson said if the dam blows out, the water could flood part of Lower Woodville Road and possibly U.S. 61 South.

Vaping could put people in workplace at risk