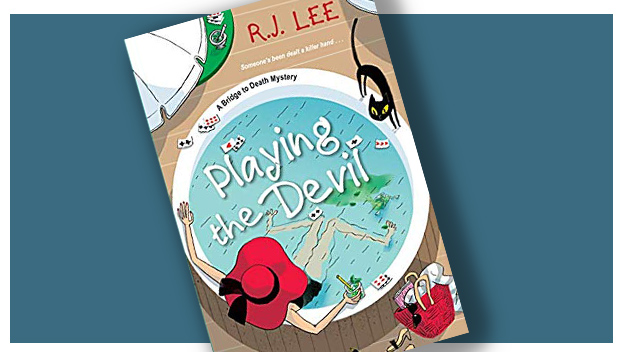 The signing will last from 10 a.m. until 11 a.m. at the library on South Commerce Street, Kuehnle said.

Kuehnle said the time of the signing had been moved earlier in the day so that it would not conflict with funeral arrangements for his friend and well-known Natchez personality Allen Brown, who died Monday at the age of 76.

“Out of respect for Allen and his family, we moved up the time of the signing from 10 to 11 a.m. that morning,” Kuehnle said. “We don’t want to create a conflict for those who would like to pay their respects to the family.”

Kuehnle said he did a book signing approximately one year ago after the release of “Grand Slam Murders,” the debut novel of his cozy murder mystery series called “A Bridge to Death Mystery” written under Kuehnle’s pen name, R.J. Lee.

Kuehnle said his second book, “Playing the Devil,” begins where the first book left off — with the same amateur sleuth Windy Winchester at the fictional town loosely based on Natchez called Rosalie.

“(Windy) has formed her own bridge club at the Rosalie Country Club because the members of the first bridge club have all been poisoned,” Kuehnle said. “We have a brand new cast of characters and we have a brand new villain, Brent Ogle. … He winds up clubbed with a pestle in the country club hot tub. No one likes him so no one is sad to see him go. Nonetheless, he was murdered and our heroine, Windy, sets out to solve his murder and everyone who was at the country club during the time of his death is a suspect.”

The library ordered 60 copies of the book that will be available for purchase for $16 each, Kuehnle said, adding copies can be reserved for those who are unable to attend.

“All proceeds will go to library funding,” he said.

For more information or to reserve a copy of the book, call 601-445-8862. Signed copies may be picked up at the library.