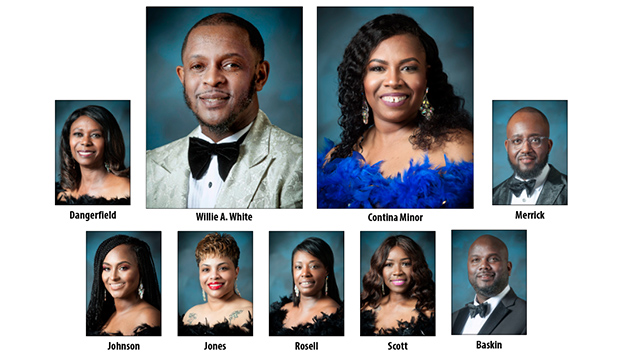 The Krewe of Janus is delighted to announce its 2020 theme, officers, and royalty for their 19th Annual Mardi Gras festivities. The grand ball will be held at 8 p.m. on Saturday, Feb. 8, 2019, at the Natchez Convention Center.

The theme for the 2020 Mardi Gras season is “A Majestic Evening of Kings and Queens.”

The Krewe of Janus 2020 Royalty is as follows:

King Willie A. White is the honorable son of Michael and Joyce White. He is the husband to Lausha White and together they has five children, Dontarrius, Jordan, Dearrius, Dontaye, and Michael. King White is a 2000 graduate of Port Gibson High School. He went on to further his education at Alcorn State University and he received his Bachelor’s Degree in 2005. King White is currently the honorable Mayor for the City of Port Gibson. He has been a successful entrepreneur since 2006, owning multiple businesses. King White is an ordained minister, Grand Master of Masons for the State of Mississippi AF&AM, Grand Sentinel for Adah Chapter Order of Eastern Star, Chairman of Brothers of the Light, Inc., as well as being a member of NAACP, Krewe of Janus, and Omega Psi Phi Fraternity, Inc. He enjoys traveling, interacting and inspiring the youth, and spending time with family. King White’s favorite quote is, “Our lives begin to end the day we become silent about things that matter.”

Queen Contina Minor is the daughter of Clyde Campbell and Ozella Franklin and the beautiful wife of Emmett Minor. Together with Emmett, they are the proud parents of Ked, Ravon, Emily, Cassidy, and Larry, and the grandparents to KeNyla and Elyse. She has one godson, Ashton, and three brothers: David, Robert, and Gerald. Queen Minor attended Frazier Elementary and Thompson Jr. High School. She is a proud graduate of the class of 1993 of Natchez High School. Queen Minor became a professional driver in 2005 when she obtained her CDL class B license. She is currently employed by the City of Natchez at Natchez Transit as a driver. She also helps manage Minor Trucking with her husband. Queen Minor is a member of Forest Aid Baptist Church and Kingdom Family, a Christian group for married couples. In her spare time she loves to dance, decorate, shop, travel, cruise, and tailgate at football games. Queen Minor’s motto is, “Dream as you will live forever, live as you will die today. The only person you should try to be better than is the person you were yesterday. Life doesn’t require that we be the best, only that we try our best.”

Captain Gloria Dangerfield is the fifth child born to Johnnie and Rosie Wright. She was married for 41 years to the late Carl Dangerfield. Captain Dangerfield has two daughters, Wynetta and JerRees; and two grandchildren, Nayzia and Zachery Jr. She is a 1971 graduate of W.O. Boston High School and a 2003 graduate of Columbia Southern University with a Bachelor’s degree in Business Administration. Captain Dangerfield was employed for 42 years with the Concordia Parish School Board and retired in 2016 as Assistant Director of Business Affairs.  She also has served as Chief Financial Officer for the Concordia Parish School Employees’ Federal Credit Union since 1985 and as the chairperson of the Ferriday Housing Commission. Captain Dangerfield is a proud member of St Mark Baptist Church of Clayton, LA where she serves on the Board of Directors and as the Minister of Music. She is also a member of the Vidalia Alumnae Chapter of Delta Sigma Theta Sorority, Inc. Her hobbies are traveling, attending sporting events and singing gospel music. Captain Dangerfield’s favorite scripture is, “And we know that all things work together for good of them that love God, to them who are called according to his purpose” –Romans 8:28

Duchess Kiara Johnson is the daughter of the late Queen Janus IV Kimberly Allen and the late Christopher Murray. She is the wife of JaDarrius Johnson and together they have three beautiful children, JaDarrius Jr., Kimbrea, and JaLee Johnson. Duchess Johnson is a 2008 graduate of Natchez High School, a 2012 graduate of Alcorn State University with a BSN, and a 2017 graduate of Purdue University Global with a MSN. She is currently in the Doctor of Nursing Program at Purdue University Global. Duchess Johnson is currently employed at Borum Family Health Clinic as a Family Nurse Practitioner and at Merit Health Natchez. She is a member of Delta Sigma Theta Sorority, Inc. and the Mississippi Association of Nurse Practitioners. Duchess Johnson loves spending time with family and friends, traveling, and relaxing. She lives by the scripture, Philippians 4:13: “I can do all things through Christ who strengthens me.”

Duchess Melissa Jones is the daughter of Lillie Jones Moore and the late Milton Hutchins and she has two daughters, Ashleigh and Madison. She has one brother, Tyrell, and two sisters, Sherry and the late Katrina. Duchess Jones is a 1998 graduate of Natchez High School. After high school she went on to attend Morris Brown College in Atlanta, GA. She obtained an Associate’s Degree from Copiah Lincoln Community College in Respiratory Therapy, and she has been a therapist for 17 and a half years. Duchess Jones is employed at Claiborne County Medical Center and Merit Health Natchez, where she works in the Cardiac Rehab Center. She attends Zion Chapel #2 Church in Kingston, MS. Duchess Jones enjoys spending time with family and friends, traveling, shopping, and enjoying life to the fullest. Her favorite quote is from Bob Marley: “Love the life you live, live the life you love.”

Duchess Angela Rosell is the wife of Henry Rosell, IV of Canton, MS. She attended the great, “Thee I Luv” Jackson State University, where she attained a Bachelor’s Degree in Science in Biology and a Masters in Healthcare Administration. At Jackson State, she was one of the first athletes to participate in their fast pitch softball program. Duchess Rosell is employed with Madison County School District as a resource educator. She is passionate about life and she is a 9 year cancer survival. Her hobbies include swimming, softball, Zumba and Pilate’s classes, and watching her Baltimore Ravens. Duchess Rosell’s motto is, “Trust and believe in God because His grace and mercy is sufficient.”

Duchess Scott is a resident of Natchez. She is the daughter of Youlanda and Latoris Cooley Sr. and the late James Carl Ellis Jr. and the granddaughter of Deloris and George Scott Sr.  She is the proud mother of three wonderful children A’Dasia, Adrian, and Ja’Kyren. Duchess Scott graduated from Natchez High School in 2001. While in high school, she was a member of the Lady Blues Drill team. She later went on to Copiah-Lincoln Community College in 2018 where she obtained an Associate’s degree in Arts. Duchess Scott is currently attending Alcorn State University pursuing her bachelor’s degree. She is employed at the Natchez Transit System as an Administrative Assistant and has been employed with the company since 2011. Duchess Scott is a member of the Rehoboth Church of God in Christ in Sibley, MS. In her spare time, Scott enjoys spending time with her children, family and friends, as well as, shopping, listening to music, and doing facial makeup. Duchess Scott’s favorite bible verse is Psalm, 28:7, “The Lord is my strength and my shield; my heart trusts in him and I am helped. Psalm 28:7

Duke Keary Baskin is a native of Houston, MS. He is the son of Henry and the late Canary Baskin and is married to Tawania Baskin and together they have three beautiful children, Cynahmon, Kyla, and Jace. Duke Baskin is a 1997 graduate of Houston High School and in 2001 he received his Bachelor of Science degree in Business Administration with an emphasis in computer science from the University of Southern Mississippi. He is employed by Enterprise Holding, Inc. as Branch Rental Manager. Duke Baskin is a member of John G. Jones Lodge #3 and Zion Hill #1 Baptist Church where he serves as a member of the Deacon ministry, the male choir, and an adult Sunday school teacher. His hobbies include hunting, fishing, wood-working, riding four wheelers and spending time with his family. Duke Baskin’s favorite Bible verse is Romans 8:31, “What shall we then say to these things?  If God be for us, who can be against us?”

Duke LaRoy Merrick is a native of Natchez, MS, but currently resides in Jackson, MS. He is the son of Connie Merrick and Theodore Merrick. He has one brother, DaMorris, and is the uncle to, Jaquan, DaMorris Jr., Kaydence, and Ryleigh. Merrick is a graduate of the mighty class of 2000 from Natchez High School. After high school, he attended the University of Southern Mississippi where he received a Bachelor of Science in Business Administration with an emphasis in Finance in August 2004. He received a Master’s in Education from the University of Southern Mississippi in December 2012 and a Specialist in Educational Leadership in August of 2015. Duke Merrick is currently working on his doctorate in Education Leadership at Mississippi College.  He is employed with Jackson Public School District as the International Baccalaureate Coordinator and he also enjoys planning events. He attends Anderson United Methodist Church and is a member of Kappa Alpha Psi Fraternity, Inc. Duke Merrick enjoys shopping, traveling, reading, and spending time with his family and friends, especially the AOE Crew. One of Merrick’s favorite quotes is, “If you do not go after what you want, you will never have it. If you do not ask, the answer will always be ‘no’. If you do not step forward, you will always be in the same place.”