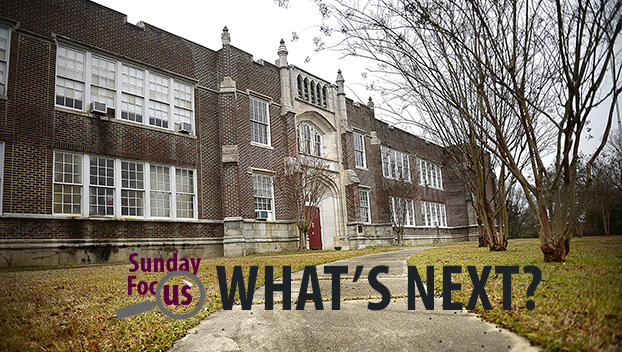 NATCHEZ — A group of supporters of restoring the Margaret Martin Performing Arts Center met Thursday evening at the Natchez Grand to discuss the future of the building with help from architect Belinda Stewart of Eupora.

Stewart was hired with community donations to produce an architectural study and list her findings, recommendations and estimated costs in a detailed report — which was completed around Christmas — and presented that information Thursday.

Natchez Festival of Music President Diana Glaze said a recent break-in that occurred at the facility last week adds to the urgency of restoring the building for regular use.

Someone had stayed at the facility long enough to unlock or break into every room of the building and tear out the building’s plumbing, copper pipes and wire, Glaze said.

“There were potato chip bags around and blankets on the sofa outside of the men’s room. They had been camped out there. … At least if someone broke in, we’d know it the next day,” Glaze said. “It wouldn’t have gone on for weeks like this seems to have.”

Stewart said the estimated construction costs from start to finish are nearly $6 million. Add professional fees, testing and contingency and the total project cost could be a little more than $7.2 million, she said.

The project could then be broken into five different phases with all the must-do items needed for reopening the common areas of the building for continuous use included in the first phase.

Phase one items are creating wheelchair access points that are compliant with current Americans with Disabilities Act regulations; updating bathrooms; repairing walls, floor and ceiling tiles, masonry, windows and some roofing; electrical and plumbing repairs; and installing an alarm system and security hardware.

Later phases include repairs to the upper level, basement and gym; installing HVAC systems; electrical upgrades throughout the building; installing a fire suppression system; and a new roof.

Last year, Democratic Sen. Bob Dearing proposed $6 million be added to a bond bill for the restoration of Margaret Martin. However, the funds were stripped from the bill before it passed.

Gibson said optimistically that the report created by Stewart could be used as a lobbying tool for having another bond issue passed this session.

Stewart said Margaret Martin is very similar to other projects she has completed with help from grants and bonds.

“About 80% of our projects have been with pre-existing buildings and the great majority of those have been historic certified buildings that were required to go through some sort of official review or approval,” Stewart said. “… We’ve helped quite a bit with funding projects. We’ve added it all up not too long ago, and we were at about $26 million in outside funding for projects. I can tell you now it’s a lot harder to get approved than it used to be but we still have success and find ways to make these projects work. We have a motto in our office that there is always a way. Sometimes you have to do it in phases and other times you can’t do everything you want to do, but there is always a way to get there.”

Gibson said Rep. Robert Johnson III, D-Natchez, strongly supported the Margaret Martin restoration and would be introducing a bill in the Mississippi House of Representatives.

Gibson said he also planned meetings with Rep. Trey Lamar, R-Senatobia, who is chairman of the Ways and Means committee, and requested a meeting with Lt. Gov. Tate Reeves.

Sen. Melanie Sojourner, R-Natchez, said she is interested in learning about the project and further discussing funding options.

Sojourner said discussions she has had in the capital indicate this session could be a tough climate for approving bonds for historic preservation projects.

“Based on the conversations that I’ve had with leadership in Jackson and with other senators, I think given the current sense of urgency within our state — whether it be for infrastructure, the prison system or with education — the likelihood of funding big entities like this anywhere within our state is going to be difficult this year,” she said. “I’m not saying that it’s impossible, but I think the state does have some more critical needs. It’s going to be a matter of how much money the state can tackle in terms of added indebtedness.”

Sojourner said she and Gibson had also discussed grants and other avenues of funding the project.

After a Tuesday meeting of the Natchez Mayor and Board of Aldermen, City Attorney Bob Latham said the city discussed the sale of the facility to a prospective buyer in a meeting closed to the public.

“I heard … that it was the entity that has purchased Dunleith,” Gibson said during Thursday’s meeting.

Mike Blattner, a friend and associate of J Collection Principal Joe Jaeger, declined to comment on the matter of purchasing Margaret Martin.

“If a private entity comes and owns this building then they become eligible for the historic tax credits — which with state in federal together would come to 45% of whatever they put into the building,” Stewart said. “With that kind of incentive, that could help move the project forward.”

Sojourner said the possibility of Margaret Martin being purchased by a private owner had been brought to her attention last week.

Sojourner said state funds have been used in the past for public-private partnerships, so long as the owners would agree to terms for public use of the facility.

“There are just a lot of different variables,” Sojourner said. “There are a lot of discussions that would have to be had as far as what that partnership would look like going forward, so to speak.”

Absentee voting is underway for the Mississippi Presidential and congressional primaries that will be March 10 and the Feb. 10... read more