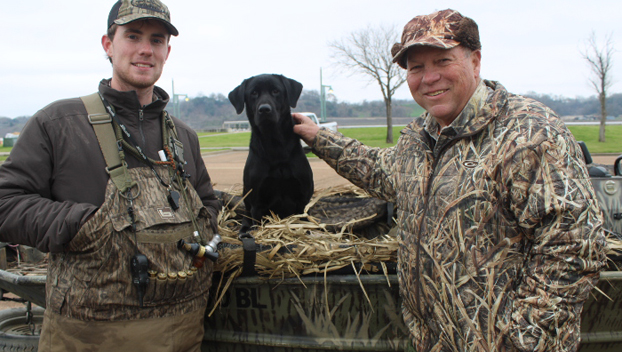 Madison Smith, Nelli and Steve Edge stand in front of their boat after a duck hunt down the Mississippi River. (Patrick Murphy, The Natchez Democrat)

VIDALIA — When The Dart landed near the Vidalia Landing Riverfront Park on Friday afternoon, Madison Smith, 21, and Steve Edge, 67, were unloading their boat after coming back down the Mississippi River from Rodney, 48 miles north of Vidalia.

They had spent the day duck hunting with a black Labrador retriever named Nelli.

“Steve got me started in duck hunting,” Smith said.

The first duck hunt Smith said he went on was when he was 11 or 12 years old and he liked it so he decided to stick with duck hunting.

“I also liked the comradery and everything else involved,” Smith said. “I like riding in the boat, taking the dog, being outside and looking at God’s creation.”

Edge, who was born in Arkansas, said he has been hunting ducks for 53 years.

The small camouflaged motorboat was filled with twigs, brambles, gear and three bags of duck decoys, used to lure real ducks closer to the hunters.

Edge said as the duck hunting season ends, the boat becomes a mess with all of the twigs and brambles from previous hunts scattered in the boat.

On Friday’s hunt, Smith and Edge killed a wood duck with Nelli right beside them in the boat. Smith and Edge said they both agree that their favorite part of duck hunting is seeing the ducks come toward the decoys.

“I also think it’s quite an adventure coming out onto the river and seeing what’s going on,” Edge said. “It’s never the same. Duck hunting beats laying around the house.”

No charges filed in case of malnourished dog

NATCHEZ — Three weeks after an emaciated dog was seized from her owner and brought to the Natchez-Adams County Humane... read more