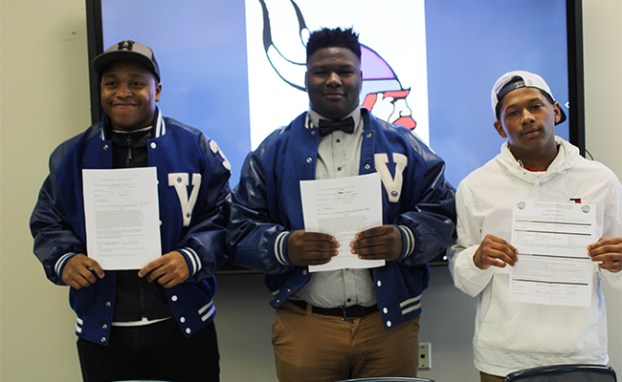 Cam’Ron Randall, Demond Crumpton Jr. and Devin Green each hold up their letters of intent at the Vidalia High School library on Friday. (Patrick Murphy, The Natchez Democrat)

VIDALIA —With family, friends and teammates surrounding them, three Vidalia High football players gathered Friday afternoon in the Vidalia High School library and signed letters of intent to continue their football careers at the collegiate level.

Both Randall and Crumpton will play for the Louisiana Community Christian College Huskies in Lafayette.

“It’s going to feel good to play with my teammate again,” Crumpton said.

Crumpton has been playing football since he was 8 years old. He said it was a special moment to be able to play in college. This past season, Crumpton was named Honorable Mention in the Louisiana High School Athletic Association All-District 2-2A football team.

Randall will join Crumpton at Louisiana Community Christian College next season. With him and Crumpton going to the same college, Randall said they would be able to motivate each other to make either the offensive or defensive teams.

This past season for the Vikings, Randall got 61 tackles, 11 tackles for loss and three sacks on defense. On offense, Randall ran for nearly 600 total yards of offense and rushed for six total touchdowns. For his efforts on the field, Randall was named to the LHSAA District 2-2A All-District First Team.

“With my signing today, it felt like I won a million dollars,” Randall said.

Green signed his letter of intent to play for the Highland Community College Scotties in Highland, Kansas.

In Green’s final year playing for Vidalia High, Green rushed for 1,211 yards (averaging 122 yards per game) and rushed for 10 total touchdowns. Green was also named to the LHSAA District 2-2A All-District First Team.

“I was thinking about working and getting a job,” Green said. “I’m happy I was given this opportunity.”

Michael Norris, Vidalia High football head coach, was on hand for the signing day festivities. Norris said he is happy to see the Vikings sign their letters of intent to play at the next level.

“One of our jobs in high school is to prepare them to have a chance to go to school and work toward a degree,” Norris said. “On the athletic side, it’s always a reward for them and their family. It’s nice to know we got to go on that journey with them. We try and tell our kids that not everybody is going to get that chance but when you see the ones that do, then you see all of the hard work and time and effort. To see them get this award today, it’s very fulfilling today as a coach.

“Of course it’s good for our program to have kids go on to the next level. It puts a stamp that we’re doing something right.”

By Bill Barksdale NATCHEZ — Cathedral’s grass soccer field was slick and muddy on a cold Thursday night, but nothing... read more

Past time to rein in crime in Mississippi