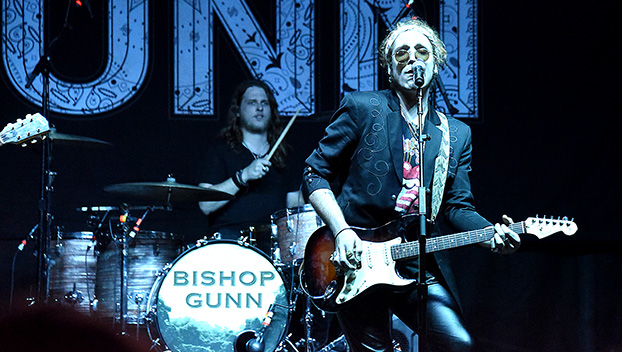 NATCHEZ — Members of Southern rock blues band Bishop Gunn of Natchez announced via social media Thursday that the band is taking a break for the foreseeable future, including canceling the band’s annual crawfish boil scheduled for May in Natchez.

“It is with heavy hearts and sadness we must announce that as of today, Bishop Gunn is suspending all future activity including tour dates and new music releases,” the social media post states. “The band is going through some internal issues right now that requires our full attention, and we need the time to sort through all of it. We don’t want our fans, friends and family to speculate on the future so we have decided to halt everything for right now. All existing tour dates are going to be canceled, and no further dates will be announced as of right now.”

Lead singer Travis McCready said the future of the band is uncertain.

“You have to know when to park it,” McCready said. “It might come back. You never know. We are all musicians so we are all going to continue making music.”

The band was formed in Natchez in 2013 and first performed at the Natchez Balloon Fest in 2014. The band members later moved to Nashville where they found success releasing their first album, titled “Natchez,” in 2018 that debuted at No. 4 on the Billboard Blues charts.

“Ben (Lewis) was a respiratory therapist, Burne (Sharpe) was in aviation, Drew (Smithers) was a hockey player and I was a steel fitter for nine years,” McCready said. “I always called us the Bad News Bears (of music.)”

Their unique sound that defied classification created a following.  The band later opened for Guns and Roses and opened for the Rolling Stones in Houston last year before opening for Slash on a European Tour.

McCready said with four “really completely different people with different plans for the future,” the longevity and sustainability of the band were always in question.

“We didn’t want to get to the point where we don’t like each other,” McCready said.

The band was currently finishing its second album “Gyspy Cadillac,” which was soon to be released.

The name of the album was inspired by a car McCready said he found when living outside of Nashville, where their first album “Natchez” was produced.

“My friend owned this old caddy that was in a junkyard down the road. He took me there and I had thought about taking it as a project while living up there creating,” McCready said. “Well I never did a damn thing with the car but the next day ‘Gypsy Cadillac’ was written.”

As for the future of the album, McCready was non-commital.

McCready said coming from living in a trailer park in Ferriday to singing in NRG stadium six years later has been an amazing experience.   “The whole thing was impossible,” McReady said.

On social media, the band recognized the importance of its fans.

“We wish to thank you all from the bottom of our hearts for the love, support, kindness and assistance you all provided us over the years. We quite literally could not have done it without you. We hope that this isn’t the end of our story, but it’s certainly a pause for right now in the hopes we can re-emerge stronger for it.”

No specifics were given for the band’s decision to suspend all activity.

On Valentine’s Day, however, guitarist Drew Smithers announced on social media that he was leaving the band.

“The experience of the last few years, and the opportunity that has been Bishop Gunn, has been incredible, life-changing and one that I will never forget. However, the time has come for me to move on and pursue new opportunities,” Smithers wrote. “To everyone who has worked so tirelessly and selflessly on our behalf, there will never be enough words to thank you.

“To the fans, you have been our greatest joy and it would have been meaningless without you. To my brothers in BG, I wish you all nothing but the best. It’s been a hell of a ride, and on a day meant to honor love, my heart is full of love and gratitude for this chapter.”

Also McCready is playing solo events including one scheduled for Monday night at the Dyson House Listening Room in Baton Rouge.

Ardenland, the promoter of the annual Bishop Gunn Crawfish Boil, had recently announced the line up for this year’s third annual event that had been scheduled for May 8 and 9 on the grounds of Rosalie Mansion.

After the band’s announcement on social media Thursday, however, Ardenland issued the following statement:

“. . . The past two years of BGCB have been nothing short of amazing, as Bishop Gunn would return to their roots and share their culture and inspiration for the music they create in a true Southern celebration. We are deeply grateful for the support of the fans, artists, sponsors and the City of Natchez.

“All tickets will be refunded in full at point of purchase. If you have questions related to your refund, please reach out to tickets@ardenland.net.”

Visit Natchez Executive Director Jennifer Ogden Combs said she was disappointed to hear the news of cancelation of the crawfish boil.

“While we are certainly disappointed that the crawfish boil won’t be happening this year we definitely want to wish the guys in Bishop Gunn well and look forward to finding out what is next,” Combs said, adding that May has always been a big music and tourism month for Natchez. “The Natchez Festival of Music is a longstanding … big part of our annual calendar. Bishop Gunn Crawfish Boil was a nice addition to that but Natchez Festival of Music has been a tremendous partner in bringing a lot of music with lots of different varieties and things for kids and educational opportunity for kids to get the experience of different genres of music.”

The crawfish boil, Combs said, was a welcome addition to the May Natchez Festival of Music lineup but she anticipates May will still be a great month for Natchez music lovers and tourists.

“If you’ve seen the schedule for the festival of music,” Combs said, “it is just going to be a great, great season. We are excited about that. We are disappointed but we wish the boys well.”

Suspect in Sunday Minor Street shooting turns himself in

NATCHEZ — The suspect in Sunday shooting on Minor Street that injured a man turned himself in to Natchez Police... read more