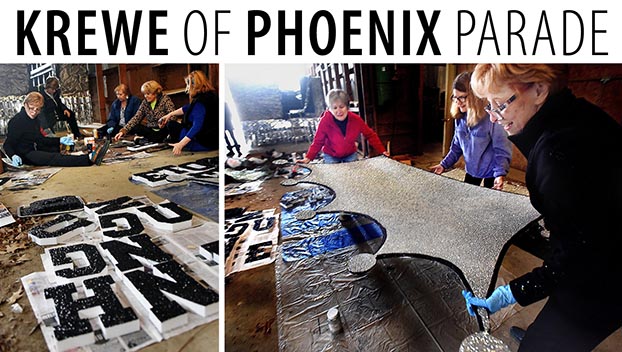 Over the Hill krewe members, at right, Sandra Burkes, Becky Junkin and Diane Burns move a large glitter covered sign in the shape of a crown for their new float that will be unveiled in the Krewe of Phoenix Parade. The krewe will announce a new name, unveil a new float for a new decade, members said. (Ben Hillyer / The Natchez Democrat)

Parade Director Curtis Moroney said approximately 40 floats would be lining up starting at approximately 1 p.m. and throughout the afternoon along Broadway Street between Franklin and Madison streets.

Moroney said it’s imperative that no one parks their vehicles on Broadway Street at any time Friday afternoon and to avoid parking on Main and Franklin Streets throughout the event so that the parade can start and end on the scheduled route.

“It’s a fairly newer route in that this will be the fourth time using it,” Moroney said. “The public’s cooperation is very important and we need as little traffic on Broadway Street as possible. … A lot of traffic makes things very difficult.”

At 6:30, Moroney said paraders would begin to travel up Franklin Street to Rankin Street, cross over to Main Street, travel down Main Street and turn left onto Canal Street, pass Fat Mama’s Tamales and turn right onto Orleans Street and end at the starting spot on Broadway Street.

The Krewe of Phoenix Mardi Gras parade is perhaps one of Natchez’s most popular annual festivities behind the Natchez Balloon Festival and continues to grow better year after year, Moroney said.

“The beads that our riders throw today are a lot better than what they used to be,” he said. “They throw good quality stuff.”

Moroney said the floats this year include at least three new krewes, including the Von Drehle Corporation, Krewe of Bottoms Up of Vidalia, the Krewe of Bon Temps — who made their first appearance in the Christmas parade — alongside almost all of “the regulars” from previous year’s events.

Moroney said he extends a lot of gratitude to the Natchez Police Department and Natchez Public Works committee for their guidance and support of the event.

“Our police department and our public works department go above and beyond,” he said. “The amount of work that they do and the amount of cooperation that we get from them is just incredible. … They are great to work with and should be applauded for that. They do a lot for us and it’s really a difficult job. We could not do it without them.”

NATCHEZ — The sign in front of Dunleith Bed and Breakfast has been turned over from “Temporarily Closed” to “Opening... read more