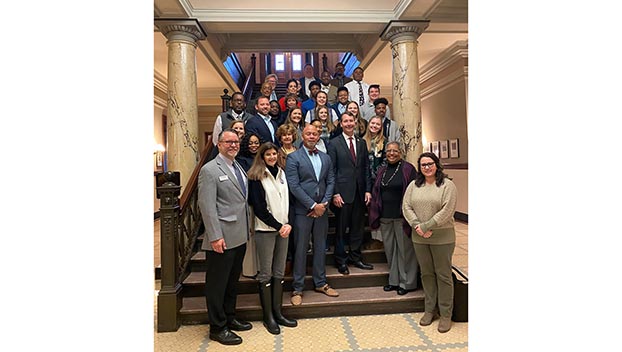 Local community leaders and members of the Natchez Mayor’s Youth Council met with local legislators at the capitol in Jackson during Natchez Day Wednesday. (submitted)

NATCHEZ — Local officials gathered at the capitol building in Jackson on Wednesday and presented the city needs to state legislators over tables filled with Fat Mama’s Tamales and Darby’s fudge.

Natchez Inc. Executive Director Chandler Russ said Natchez Inc., in conjunction with other economic development partners, was able to map out strategies to meet legislative priorities for this session during “Natchez Day at the Capitol.”

The priorities Russ listed included creating a 1% food and beverage tax countywide to pay down the debt for various economic development projects, funding renovations for Margaret Martin Performing Arts Center and allowing the City of Natchez to increase the amount of money allocated to Natchez Inc. to assist downtown development and Film Natchez.

“It went really well,” Russ said. “We’re proud to continue to host Natchez Day at the Capitol in conjunction with our other partners. … Ultimately, we were able to meet with all of our delegation. … They were supportive of the legislative items that we had and some will be champions of the legislation that we presented.”

Natchez Mayor Darryl Grennell said he along with Alderwomen Sarah Carter-Smith and Joyce Arceneaux-Mathis, the Adams County Board of Supervisors and representatives of Natchez Inc., Visit Natchez and the Natchez Convention Promotion Commission all attended Natchez Day at the Capitol.

All five members of the Adams County Board of Supervisors paid a visit to the capitol building on their way to the Mississippi Association of Supervisors conference, Grennell said.

Local leaders were joined by 15 students from Adams County Christian School, Cathedral High School and Natchez High School, who are members of the Mayor’s Youth Council. The students were able to meet Lt. Gov. Delbert Hosemann Jr., tour the capitol building and hear a lecture on the legislative process, Grennell said.

“We wanted to meet and greet with all of our legislators in general, both senators and representatives,” Grennell said. “We had booths and we also have two hospitality rooms at the capitol where we invited senators and representatives to come by and have tamales and fudge. … Specifically, I had the opportunity to meet with our legislative delegation … and I addressed with them some of the critical issues that we are dealing with.”

Grennell said he presented packet with visual aids that show the need to stabilize the bluff area between Learned’s Mill Road and Silver Street.

Mudslides occurred along the Natchez trails between Learned’s Mill Road and Roth Hill Road when there was an 8 to 10-inch rain event a month ago, Grennell said, adding he hopes that the state could assist with mitigating the issue.

Grennell said he anticipates he would have an engineer’s estimate for stabilizing the bluff to present to the legislators next week but did not have any hard costs on the project as of Wednesday.

“Rep. (Robert) Johnson said he was really glad that I got that information (about the mudslides) to them now,” Grennell said.

Grennell said he also made a presentation for an Emergency Watershed Project at the Department of Human Service’s building on East Franklin Street on behalf of the Board of Supervisors.

County officials said that flooding in the parking lot around the building is causing erosion damage underneath the structure.

“Those projects are critical for the community,” Grennell said.