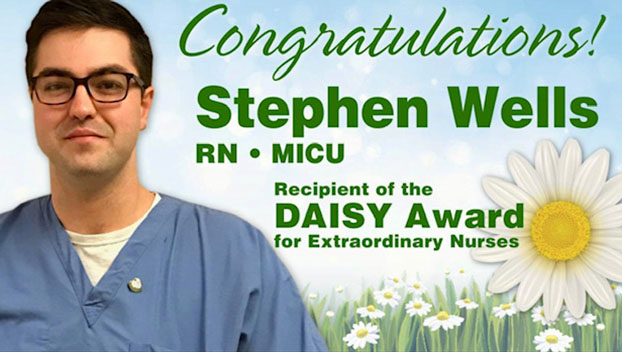 VIDALIA — It’s not every day that a trip to Best Buy can save a life.

For an Alexandria Rapides Regional Medical Center RN, formerly of Vidalia, that day happened in October.

Stephen Wells said he was out appliance shopping with his wife and two children and just happened to be in the right place at the right time to save a young man’s life in the store parking lot in Alexandria.

“As I’m coming out of the store, I see across the parking lot close to where I was parked a man and a younger guy crouched down. … As I get closer, I see that they were actually crouched down over a body,” Wells said.

Wells had just started at Rapides as an RN in July and had practiced as an LPN for approximately five years, he said.

When Wells saw the young man lying on the asphalt, he said his lips were blue, his skin was hot, and his pulse was very fast and very weak like a tremor.

In the 6 to 7 minutes before first responders could arrive, Wells’ nursing training kicked in and he took over, he said.

“I said we’d have to start cooling him off … We came running out with some ice-cold bottled water. I knew if we just threw it on him he would go into shock, so we tuck it into his underarms and around his legs,” Wells said.

Soon after, an Acadian truck arrived with a crash cart and Wells walked through procedures with the responder before Emergency Medical Transport services arrived, he said.

Wells said the man’s core body temperature was 107-degrees. Had Wells not been there to act quickly, his chances for survival would have been slim, he said.

“Right before they left, he did lose his pulse and I did some quick compressions,” Wells said.

Wells’ parking lot patient was treated in the ICU of Cabrini Hospital in Alexandria for more than a week and is now doing well. Two or three weeks after the incident, word reached Wells’ MICU Manager at Rapides.

“My director asked, ‘Did you happen to save a life in the Best Buy parking lot?’ … ‘Why didn’t you say anything?’” Wells said. “I told him, I just happened to be in the right place at the right time. … I’m just glad that I was there. … When we’re in the hospital setting, we do whatever we can do without hesitating. But outside of this setting, many well-trained professionals don’t know how they would respond. … It was a great moment, but kind of scary.”

Wells had been nominated and received the Daisy Award, which is issued to only a handful of extraordinary nurses out of more than 5,000 applicants.

“The good news out of all of this is that the guy actually lived and is doing well from what I’ve heard,” Wells said. “At the end of the day, … the biggest thing that I hope anyone takes away from this is even if you don’t know what to do, call for help. … A lot of people don’t know just from looking at me on the street that I’m a nurse. I don’t wear a sticker on my forehead. … If you call for help, someone will come.”