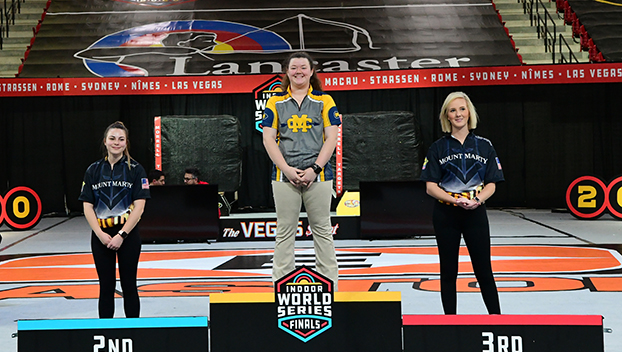 Kathryn Freeman stands in the middle as the Collegiate Bowhunter Female Division winner at The Vegas Shoot in February. (Courtesy Mississippi College)

“It was a great opportunity, it was awesome and I really enjoyed it,” Freeman said. “As a freshman and competing against other collegiate female bow hunters, I was like, ‘Man, I can actually do something here.’”

The Vegas Shoot is an indoor archery tournament, which attracts more than 3,800 archers from around the world.

In the collegiate division, bow hunters shot 30 arrows for two days. The bow hunters shoot at targets and earned points. The total amount of points is totaled between the two days of competition.

Six archers on the Mississippi College Choctaws also participated in The Vegas Shoot.

Anna Carraway also competed in the Collegiate Bowhunter Female Division. She finished seventh with 529 points. Carraway won $90 for winning her Flight, the group of bow hunters she shot against.

In the team competition, the Choctaws combined for 1,588 points and finished sixth out of nine teams.

“It was an awesome opportunity and we’re blessed to go as a team,” Freeman said. “We are thankful for the school for letting us go. It was an amazing experience and I’m excited to go back next year, if we have that opportunity.”