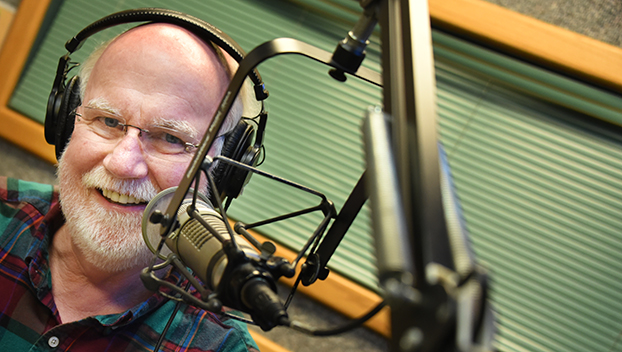 On Friday, Rosco on the Radio will sign off from the 95-Country radio broadcast. (Ben Hillyer / The Natchez Democrat)

Signing off: Rosco on the Radio retiring after 30 years

NATCHEZ — When Rosco on the Radio signs off Friday, the radio DJ will end 30 years as the voice that helped wake up the Miss-Lou.

After three decades heading up the 95-Country morning radio show, Rosco will be retiring from the airwaves.

Since 1990, Rosco’s distinctive voice and kind-hearted style have been a mainstay of the Natchez radio station.

Looking back on the past three decades, Rosco said he has thoroughly enjoyed serving area listeners.

“I love this area. I love what I do,” he said. “I have always enjoyed radio and never thought about doing anything else.”

Kimbro’s radio career started long before 1990 at the same radio station from which he is retiring.

Still, the job led Kimbro to a long career in radio, including many years on the airwaves for two of Jackson’s most popular radio stations.

At WJDX-AM, Kimbro gained a following as the radio personality “Doloroso Flash” — a name that referred to the Doloroso community south of Natchez. Kimbro said the name was “terrible” and one few people could remember.

Then in 1984, Kimbro went to work for WTYX-FM in Jackson.

Not happy with his previous radio name Kimbro decided 30-minutes before he went on-air at his new gig that he needed a new name.

“I didn’t want to be Dave Kimbro the Doloroso Flash,” Kimbro said. “So I thought, ‘Doloroso — Rosco — Rosco on the Radio.’ It came out just like that and I kept it ever since.”

Soon after Rosco became a radio celebrity and a household name in the Jackson market.

“About four months later, they moved me to the afternoon drive time and it took off like a rocket. We were the hottest station in town and the state.”

Wanting to return home to be near his ill father, Kimbro chose to return to Natchez in 1990 and joined WQNZ. Several months after his father died, Kimbro said he considered moving away, but never did.

“Natchez kept me. It turned into a fun gig,” Kimbro said. “When you have a good thing, it is hard to walk away.”

Primarily, Kimbro said he loves the people in the community, something he says he will miss when he retires.

“I will miss the interaction with our listeners,” Kimbro said.

As much as he misses the people, Kimbro said there is one thing he will not miss.

“It won’t be getting up early,” Kimbro said with a laugh.

On the mornings he is on the air, Kimbro said he gets up shortly after 5 a.m. to be at the radio station by 6 a.m.

For many listeners, Kimbro is well-known for his involvement in the community.

Kimbro has been an ardent supporter of Pleasant Acre Day School — a learning center for adults with special needs.

“I love my friends at Pleasant Acre,” Kimbro said. “Pleasant Acre Day School has always been dear to me.”

In addition to Pleasant Acre, Kimbro has also helped support Relay for Life, the Concordia D.A.R.E. program, the Adams County Youth Coalition and other organizations.

Next month, Kimbro will make a brief return to the airwaves to help with the St. Jude Radiothon on 95-Country.

“I have been blessed to do so many fun things,” Kimbro said.

In the last 30 years, Kimbro has been the grand marshal for the Natchez Christmas Parade, duke for both the Krewe of Alpheus and the Krewe of Phoenix and St. Patrick for the Krewe of Killarney.

In 2018 he was named Natchezian Man of the Year by the Natchez-Adams County Chamber of Commerce.

In retirement, Kimbro said he will be trading the microphone for a hammer and other tools.

In addition to the time he will be spending with his wife and their pets, Kimbro said he will be working on the couple’s house.

“I am doing a little project on Lake St. John that is going to keep me busy for a while,” Kimbro said. “I have got the wounds and the bruises to prove it.”

Even still, Kimbro said he plans to stay involved in the community he loves.

“I will still be around,” Kimbro said.