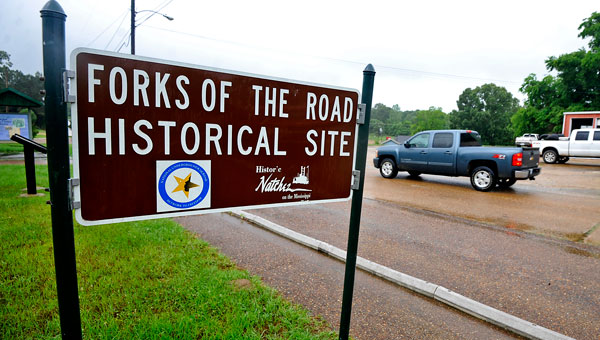 File photo — A vehicle drives past the Forks of the Road historical site sign Wednesday morning. On the site was the second-largest slave market in the United States. The Natchez Preservation Commission recommended landmark status for the property

That green space a small part of the Forks of the Road that used to be the site of the slave trade in Natchez from 1833 to 1863 and Forks of the Road was the second-largest slave market in the United States second only to New Orleans.

“The reason this place is called Forks of the Road is because of the three ways you could come into town during the 1830 to the 1860s,” Houston said. “That would have been your east direction and going down St. Catherine would have been the south direction and coming down what is now Devereux Drive, but Devereux Drive wasn’t there at the time. The road would have been where Old Washington Road is now. Old Washington Road was a part of Washington Road and a part of the Natchez Trace so the Natchez Trace served as a major highway in the transporting or the importing and exporting black people in and out of Natchez during that time period.”

Houston, who conducts tours focusing on Natchez’s Black History, said the Forks of the Road brings the history of Natchez’s enslaved people to life for tourists who visit Natchez from throughout the world.

Today, thanks to the efforts of Ser Seshs Ab Heter CM Boxley and others, the Forks of the Road now have historical markers and plaques that help tell visitors of the slave trade history in Natchez.

“Site of the South’s second-largest slave market in the 19th century,” a historic marker on the site reads. “Enslaved people were also once sold on city streets and at the landing at Natchez Under the Hill. Natchez slaves were freed in July 1863, when Union troops occupied the city. The Forks of the Road market then became a refuge for hundreds of emancipated people.”

Houston said Union black soldiers were stationed on the site after their emancipation.

“Black soldiers came to this very location and tore down all of those slave jails that they had here and markets and they built barracks for units like the 58th, 70th and 71st USCT that all stationed themselves here at the Forks of the Road during the Civil War,” Houston said. “Can you imagine one day you were sold as somebody’s property and a couple of years later the Union Army comes to Natchez and they give you a blue uniform, guns and different other things and you overtake the same people who enslaved you for your life. We call that a day of justice and we are very proud of that sign that Mr. Boxley put up here.”

Houston said he and others owe a debt of gratitude to Boxley.

“All of those exhibits that you see up there were placed there in the year 2006 and Mr. Boxley raised $7,000, so that all of this could be put here. He raised that and he continues to contribute to this site. Without him, our eyes wouldn’t be woken up to what we need to be doing.”

Houston said being on the site of Forks of the Road is an emotional experience for anyone who visits.

“You have a list of these dealers coming in and out of Natchez during the 1830s until the 1860s, supposedly 2,000 people per year were sold here at the Forks of the Road, but no one really has an accurate count because no one really kept numbers like that,” Houston said. “The price of slaves would have varied in that 30-year period also, beginning in the 1830s the price of a slave would have ranged from $500 to $700 and about the 1860s no one sold for less than $1,600 here at the Forks of the Road.”

Houston said he believes it is important for people to remember the history in order for it not to be repeated.

“History repeats itself and Houston is big on making a change for us to learn from it versus repeating it or just not paying attention to it or not ignoring anything about it,” said Greg Myles a friend of Houston’s and fellow Natchez tour guide. “He is the one who will come in and fill that void.”

Signing off: Rosco on the Radio retiring after 30 years

NATCHEZ — When Rosco on the Radio signs off Friday, the radio DJ will end 30 years as the voice... read more