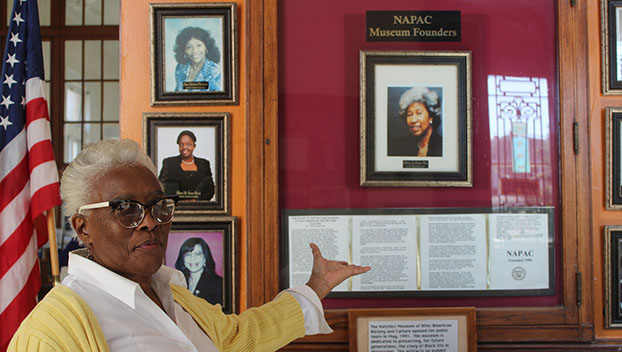 Ask tour guide Viola Davis and she will tell you the museum’s history begins with Judge Mary Lee Toles, the first black judge in Natchez and who is the founder of the Natchez African American Museum.

“With every tour I give, I start with the founder of the museum,” Davis said. “It was her vision to create and build the African American Museum of History and Culture. But after she had collected a variety of things, she needed help.”

Toles then called upon six other women to help with the creation of the museum. The other founders were Patricia Powers, Juanita Green Jones, Mary L. White, Patricia P. Washington, Flora M. Green Terrell and Josie Gilchrist Anderson.

The museum was built 30 years ago with the original part of the building filled with artifacts from the civil rights area and beyond.

On tours Davis also shows people pictures of the Rhythm Night Club, where some 209 mostly African American people lost their lives in a fire on April 23, 1940. The disaster is the fourth deadliest nightclub fire in world history.

After stopping at the picture of the Rthym Night Club, Davis continues her tour of the museum taking visitors to the white cotton and black labor section, which features a diorama with a statue of a slave putting cotton into a machine that was made by a blacksmith.

“I’m very familiar with cotton because I was raised on a farm,” Davis said. “From what I read, the engine separates the cotton, rather than people separating the cotton. I never knew people would separate the seeds from the cotton.”

Other exhibits feature information on the life of literary giant Richard Wright who spent much of his childhood in Natchez.

“It’s a great opportunity to meet people from all over the world,” Dreyer said. “I was in the Peace Corps in Nepal. Three weeks ago, people from Nepal were here. We have had people from Shanghai, Uzbekistan and France. About one third of our visitors come from abroad.”

Frances Wallace, marketing manager for the African American Museum of History and Culture, has volunteered at the museum for three years.

“It’s good to tell young people that they don’t have to worry about what others are doing and mimic other people,” Wallace said. “Whatever their vision is in their life, they need to go forward with their vision. They can see how these people on the Natchez Firsts wall accomplished what they did.”

When someone visits the African American Museum of History and Culture, it will provide the visitor a look at another dimension of Natchez history.

“It tells a lot about the African American culture and that was why it was built,” Wallace said. “It was built to tell the correct story. The theme of the museum is ‘We exist to tell our story.’”