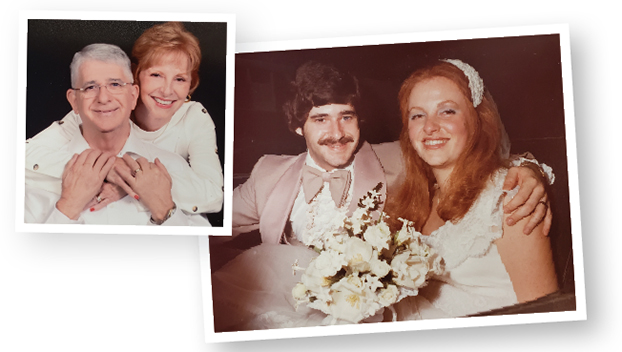 NATCHEZ — Leap day is a special day to some folks with Natchez ties and not just because it only comes around once every four years on leap year.

A lucky few who were born or married on Feb. 29, which is Saturday this year, said they still celebrate their birthday or anniversary once a year, some more than once, even though the day often gets skipped on the calendar.

Diane and Peter Burns married on Feb. 29, 1976, will have been married 44 years on Leap Day but will be celebrating their 11th official anniversary.

The couple has two sons who are grown, Carter Burns of Natchez and Tyler Burns of Baton Rouge, and are new grandparents to a grandson, Henry.

Diane, originally of Woodville, said she and her Natchez husband met on a blind date staged by her sister and his sister-in-law.

After dating a year, they decided they wanted a Sunday afternoon wedding in the spring but felt it would be impossible to get married during the weeks of Natchez’s Spring Pilgrimage. Peter’s family owned a Main Street shoe store and Easter month — which was in April — would have been a busy time for the store, Diane said, so they decided to get married on the last Sunday of February, which happened to be Leap Day.

“We always celebrate the day after Feb. 28, either the 29th or March 1,” Diane said. “… I believe a lot more people remember it’s our anniversary because it’s a special day.”

Audrey J. Crisp, who will be 8 years old on Saturday, gets teasingly told that she will only be 2 instead of 8, family members said.

“To her, it’s kind of cool,” Ashley said. “… This year, we’re having a skate party and she’s also excited that it’s on a Saturday so she will be able to celebrate on her ‘real birthday.’”

Audrey is the first grandchild to Donna and Tucker Crisp and Lester and Sharon Freeman of Natchez. Audrey is a dancer and also is a big sister to 4-year-old Amelia.

She was born on Feb. 29, 2012, at Duke University Hospital in North Carolina.

“She was not supposed to be born on leap day,” Donna Crisp said. “I had to reschedule my flight a few times because I wanted to be there when she was born. She was actually due March 2 or 3.”

Ashley said it seemed like Audrey was the only baby born on leap day while most other mothers tried to avoid it. However, Audrey’s leap day birthday wound up being a special thing, Ashley said.

Donna said Audrey is well aware that she was born on a special day of the year — a lot like her mother Ashley who was born on New Year’s Day in 1985.

“We tell her all the time that she was born on a special day,” Donna said.

Kelly Bingham and her twin brother, Kelvin, will be celebrating their ninth official birthday Saturday and will be turning 32.

“We are very close,” Kelly Bingham said. “… We were born one minute apart and I reminded him all of the time that I was born first. Up until we were teenagers, I was always a little taller too and then suddenly he outgrew me. He still is the baby and the only boy.”

Kelly said she and her brother were raised in the small town of Red Lick, Mississippi, near Lorman and were the last two of five children born to their mother, Rosie L. Bingham. Kelly is an assistant special education teacher in the Natchez-Adams School District and her brother is a truck driver for Waste Pro, she said.

Kelvin and Kelly never missed a birthday growing up and sometimes celebrated twice in one year, Kelly said.

“We do both, the 28th and March 1 and when the 29th comes around we try to do something special,” she said.

This Saturday, Kelly said she and her brother would be getting together for dinner with close family and friends.

“Having a leap day birthday is kind of unique, especially being a twin,” Kelly said.