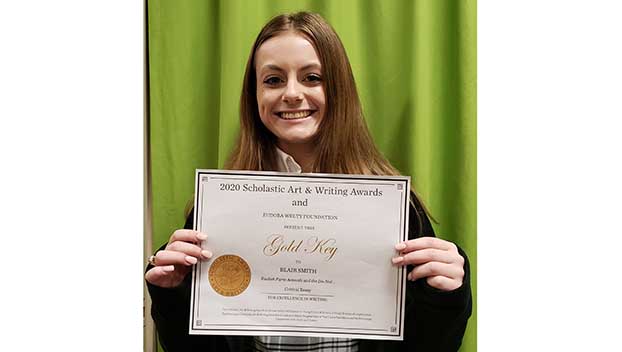 Blair Smith, the daughter of Lydia Smith and Michael Shull, said she submitted an essay she wrote about George Orwell’s “Animal Farm” in her Advanced Placement English Class to the Eudora Welty Foundation’s Scholastic Art and Writing competition, which represents 82 Mississippi counties and receives hundreds of entries each year.

AP English Language and Composition teacher Jean Biglane said Smith is among two of her advanced students to place in the competition, alongside Annalyce Riley who placed second.

Both girls will be honored at an awards ceremony at the Eudora Welty House in Jackson next month and received scholarships to attend the four-day McMullan Young Writers Workshop at Millsaps College this summer.

“Both Blair Smith and Annalyce Riley are among those high school juniors and seniors at Cathedral who annually pursue academic excellence through the school’s Advanced Placement courses in order to challenge and hone their creativity and their critical thinking and writing skills,” Biglane said. “This recognition of these two students’ amazing and exceptional effort in the school’s most challenging courses is an affirmation of their scholarly dedication.”

Smith is a member of Cathedral’s dance and tennis teams. She also participates in the National Honor Society and Mayor’s Youth Council and enjoys photography and music, she said.

When she graduates, Smith said she plans to study psychology at the University of Mississippi and is interested in social work.

“I’ve always liked psychology and I’m interested in helping people get through their personal issues,” she said.

Natchez chef to be featured on Hallmark Channel Wednesday morning

NATCHEZ — Natchez will get a plug on a nationally televised morning show starting at 9 a.m. Wednesday when Natchez’s... read more

NASD school buses will be used to deliver meals to students

The Dart: Man prefers life on river in Natchez over New Orleans