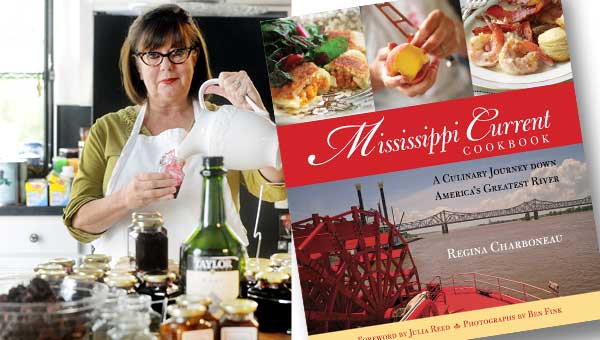 Ben Hillyer / The Natchez Democrat — Local Chef Regina Charboneau enjoys making everything from cheese pennies to blackberry, port wine jam. The chef de cuisine for the American Queen, Charboneau recently finished her new cookbook inspired by her trips down the river on the steamboat.

Natchez chef to be featured on Hallmark Channel Wednesday morning

NATCHEZ — Natchez will get a plug on a nationally televised morning show starting at 9 a.m. Wednesday when Natchez’s own Queen of Biscuits, Regina Charboneau, is featured in a cooking segment on the Hallmark Channel’s “Home and Family” show.

Charboneau said the cooking segment will focus on her biscuits and she hopefully will get a plug in for Natchez.

“It’s fun, and it is a good thing for Natchez,” Charboneau said of doing television segments. “I sent them photos of Natchez, hopefully for the background for when they introduce me. I’m always trying to promote Natchez and get the word out.”

Charboneau said she spent the weekend in Los Angeles in preparation for Tuesday’s taping in front of a live audience that will be aired at 9 a.m. Wednesday on the Hallmark Channel.

“I have a lot of friends in LA so I had a great weekend visiting with my friends . . . just people that I’ve known for a long time,” Charboneau said. “I don’t get out here much so it is nice to just come and reconnect with people. If somebody gives me an excuse like come make biscuits for The Hallmark Channel then it is perfect.”

After her weekend experience in L.A., Charboneau, who owns Regina’s Kitchen Cooking School, Twin Oaks B&B and King’s Tavern & Charboneau Distillery, said she is convinced that Natchez is the “center of the universe.”

Charboneau said musician Kevin Dukes, who grew up in Natchez but who has toured with Sting and Billy Joel among others, is married to Bente, who is a set designer in Los Angeles.

“Natchez is the center of the universe I’m convinced,” Charboneau said, adding she got to enjoy a brunch with three of her son Martin’s friends who graduated from NYU and her nephew John.

“They are all trying to break into acting and writing out here,” Charboneau said. “That was a great Sunday. Anyway, Natchez is just everywhere I look.”

Charboneau said she plans to spread the word about Natchez as much as she can in her segment on the “Home and Family” show that airs at 9 a.m. Wednesday on the Hallmark Channel.

“I will tell people to come visit,” Charboneau said, adding she will work hours to have a seven-minute cooking segment on the show. “It is a great beautiful place on the river, but I don’t know how much I can get in in that amount of time.”