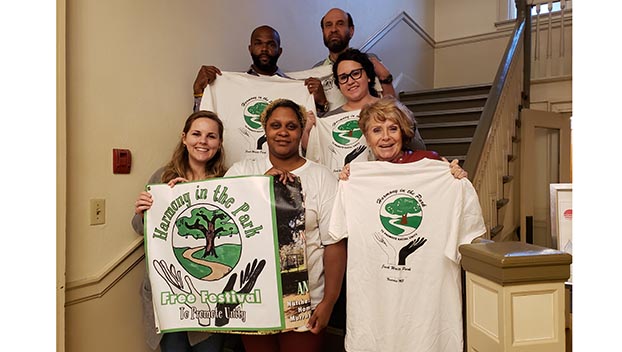 Organizers of “Harmony in the Park” hold the sign and T-shirt from last year’s event while they prepare for a another event at 2 p.m. April 11 at Jack Waite Park. Top row: Marcus Sullivan, James Johnston and Kaytlyn McDonald. Bottom row: Katie Ernst, Jarita Frazier-King and Jack Kelly. (Sabrina Robertson / The Natchez Democrat)

NATCHEZ — Organizers are getting ready to set the stage for the second annual free-to-attend festival at Jack Waite Park next month that promotes racial harmony through a mash up concert of various musical genres performed by local musicians.

The second annual Harmony in the Park starts at 2 p.m. Saturday, April 11, at Jack Waite Park on McCabe Street in Natchez.

The goal of the event is for people of all age groups and races to unite for a day of enjoyment, organizers said.

Last April, a diverse group of all ages came to the event for an afternoon of music, sports, face painting, craft making and fun, said Leadership Natchez President Katie Ernst.

“People came and went, and the Humane Society brought some dogs and two dogs were adopted,” Ernst said. “It was just a really great event.”

The festival is free and open to the public; however, attendees will want to bring some spending money for food, crafts and commemorative cups and T-shirts if they so choose, organizers said.

Four different bands will be featured in the line-up, including, Mississippi Avenue, NRhythm, 61 Jazz Band and Radio Zydeco.

Organizers said more information and announcements are coming soon to the “Harmony in the Park” page on social media.