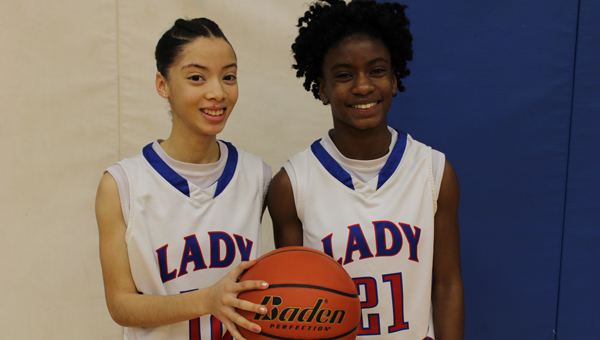 From left, Jada Poole and Nyla Poole hold a basketball up before a Vidalia High Lady Vikings game in the 2019-20 basketball season. (Patrick Murphy, The Natchez Democrat)

The Vidalia High Lady Vikings 2019-20 basketball season was special for both Nyla Poole and Jada Poole.

That was the only season the Poole sisters played on the same team during high school.

“We all looked forward to this one season we got to play basketball with each other,” Nyla Poole said. “This season was one of a kind because Jada is going to college next year.”

The Poole sisters learned how to play with each other through playing against their father, James Poole Jr., in pickup basketball games on the blacktops of Vidalia.

Both Nyla and Jada Poole have learned how to play with each other through the pickup basketball games.

“We both adapted to each other games, so we have learned how to play with each other to put us in the best position to be successful on the court,” Nyla Poole said.

“It’s a lot of fun playing on the same team,” Nyla Poole said. “We already have chemistry with growing up and playing basketball together. We both have a love of the game.”

Vidalia High ended their season with an 87-43 loss to Red River High School on Feb. 20 in the first round of the LHSAA Class 2A playoffs.

“I have enjoyed playing with my sister this season,” Nyla Poole said. “I just want to thank the Lord for giving me the opportunity for me to play with her.”

NATCHEZ — The Glenbrook School Apaches used a seven-run rally in the top of the fourth inning to defeat the... read more