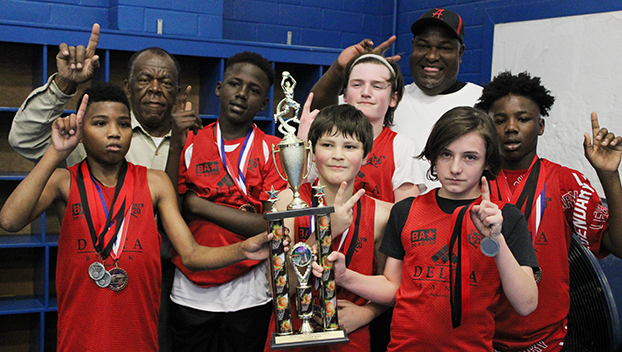 Delta Bank 13 and under boys team with the championship trophy. (Patrick Murphy, The Natchez Democrat)

Frank Duson was the head coach of the Johnny’s Pizza 12 and under girl’s team and Delta Bank 13 and under boys’ team.

This was Duson’s 27th year of coaching.

“I love coaching and I love kids,” Duson said. “Any chance I get to mentor kids is a plus. I treat each one of the players like their family. It doesn’t matter whatever your color of your skin and your gender.”

In the 12 and under girls’ championship game, Johnny’s Pizza won 15-0 over Reed Insurance.

Jaxon Braisher led State Farm with 33 points. Braisher made 11 3-pointers in the game.