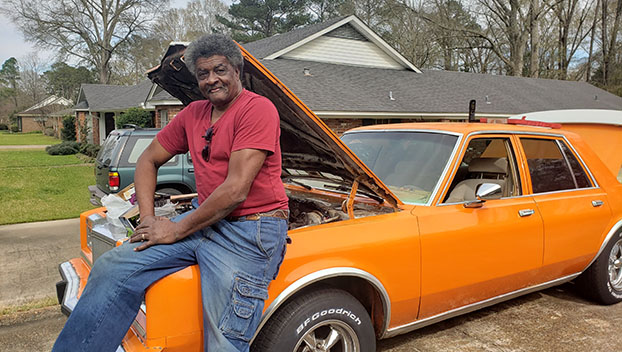 Jessie Carter sits on the fender of his 1985 Plymouth Gran Fury, which he worked on restoring Saturday afternoon outside his home on Espero Drive. (Sabrina Robertson / The Natchez Democrat)

The Dart: Natchez man and his car share a lot in common

NATCHEZ — Some automobiles seem to share the same personality as the person driving them.

When The Dart landed near the home of Jessie Carter on Espero Drive Saturday afternoon, Carter was working to restore his bright orange 1985 Plymouth Gran Fury, a car he said could be one of the last of its kind.

Carter, like the car, has been a lot of places and has seen a lot of things through the years God has given him, he said.

Carter is a veteran and was drafted into the U.S. Army soon after he graduated from high school in Natchez in 1968, he said. He served for two years in West Berlin.

When Carter first bought the car approximately 35 years ago from his employer in the oil business “it only had 43,000 miles on it,” Carter said. “It hadn’t even been broken in yet.”

“I redid the engine in it because of just wear and tear over time, but it really never did have too much wear and tear on it. I’m not a racecar driver,” Carter said.

Carter said he and the Fury have traveled clear across the country together.

In 1989, he hitched a trailer to the back, filled it with his belongings and drove to Las Vegas to find work.

It was there that Carter said he found a special skill that not many people could do. At the Mirage Hotel, he became self-taught at working the floor-polishing machine and gave the floors their glossy shine.

“Some people were scared to walk on it because they thought it was wet and they might slip,” he said with a smile. “It wasn’t wet, but glassy smooth. You can’t find floors that look like that around here.”

Carter said when he moved home to take care of his mother a few years later, the hotel owner asked if he would move his family to Las Vegas instead.

“I told him, ‘No, my mother is born and raised in the country and she wouldn’t do that,’” he said. “That’s what brought me back here.”

NATCHEZ — A celebrity chef and a pair of filmmakers plan to reopen the former Smoot’s Grocery and Steampunk Coffee... read more