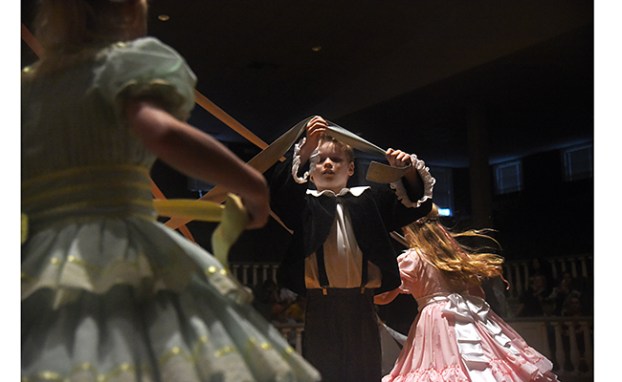 (File photo) Local children dances around a maypole during a rehearsal for the Tableaux.

NATCHEZ — Natchez residents are invited to attend the first evening of the Historic Natchez Tableaux for free on Friday, March 13.

The Tableaux, a presentation of the Natchez Garden Club, begins at 7:30 p.m. Friday and continues at that time on Saturday and March 20, 21 and 27 at the City Auditorium.

“All Natchez residents have to do on Friday is show their driver’s license,” said Paige Carter, who is chairman of the event along with Michelle Skates.

The Tableau includes the Little Maypole, the Big Maypole, the Polka, an Evening at Concord, the Showboat, the Hunt and the presentation of the Royal Court, which many Natchez residents will remember from the pageant’s heyday.

More than 100 Natchez residents volunteer to make the performances a reality, Carter said.

In addition to Natchez Garden Club members and many of their children and grandchildren, others are involved, including Mignon Reid Lefebvre, director of the Natchez Ballet Academy, and her ballet students; Cathedral High School’s Emerald Tide dancers perform the Can Can; Terrance Robinson of the Natchez Little Theater performs “Ol’ Man River.”

“We are in fact working together for a better future. A beautification program is under way Under The Hill. Both garden clubs are working to welcome the boats by beautifying the blighted dock area,” she said.

For its part, the Pilgrimage Garden Club features a Royal Evening at Longwood during the last two weeks of Spring Pilgrimage.

Its dates are March 27, 28, April 3 at Longwood and the Grand Finale at the City Auditorium on April 4.

A Royal Evening at Longwood is billed as the dramatic story of the never-completed mansion, presented by re-enactors in period costumes, dancing and singing to live music, including some songs from the musical, “Show Boat.” The evening concludes with the presentation of the Pilgrimage Garden Club’s King and Queen and their court, along with a Royal champagne toast and light dessert.

Tickets for the Royal Evening at Longwood are $15 per person.

Ticket information for both events is available at natchezpilgrimage.com.

The Dart: Natchez man and his car share a lot in common

NATCHEZ — Some automobiles seem to share the same personality as the person driving them. When The Dart landed near... read more