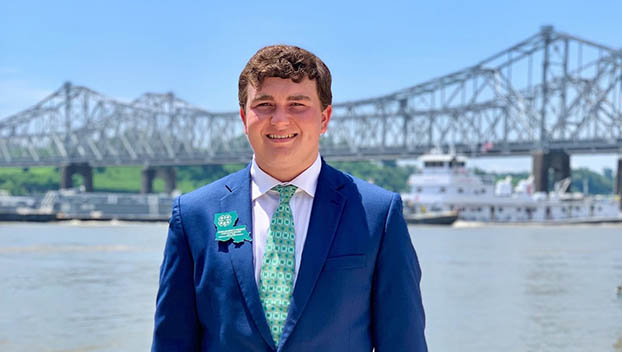 VIDALIA — An aspiring politician and senior at Concordia Parish Academy of Math Science and Technology is passionate about making changes in community for the better and has already played a role in making changes for Louisiana schools on the state level.

John-Garrett Patrick, the son of Sabrina and Tab Doré, was recently named the Regional Student of the Year in Concordia Parish and is among seven finalists for the 2020 Louisiana Student of the Year, which will be chosen April 1 in Baton Rouge.

Students of the Year were nominated by teachers and principals in schools throughout the state in fifth, eighth and 12th-grades.

Patrick said he and other Students of the Year had to piece together a portfolio and write an essay that highlights all of their accomplishments and student involvement.

Patrick was also interviewed by school officials in West Monroe and will later be interviewed again in Baton Rouge before the Louisiana Student of the Year is selected, he said.

Patrick serves as a state 4-H officer as the chairman of the marketing committee and the historian/reporter on the executive board, in which he and his colleagues responsible for planning 4-H meetings and events statewide.

“What we try to do is advocate for youth in the state and last year actually co-drafted a bill (with Louisiana State Sen. Conrad Appel) that passed unanimously in the Louisiana House and Senate and was signed by Gov. John Bel Edwards. It dealt with crisis management and response plans in schools throughout the state. Student representation was needed in the decision-making for the plans,” he said.

On the local level, Patrick plays on the Vidalia High School tennis team and is ranked first in his class.

Patrick’s class is the first senior class at Concordia Parish Academy, which opened first opened in 2012 with students in kindergarten through fifth-grade.

“It’s definitely humbling to be able to represent my school and parish (as the Student of the Year), especially with this being CPA’s first graduating class and first shot at having a senior Student of the Year. It’s also reassurance to me of all the things I’ve done and accomplished so far, as if to say ‘You did it.’”

Patrick said he will graduate in May with an Associates Degree from Northwestern State University and plans to double major in Agriculture and Accounting at Louisiana State University in Baton Rouge.

“I want to go into politics, starting as a lobbyist and work my way up to being an elected official,” Patrick said. “Ever since I joined 4-H I started to become more and more involved in my community. I wanted to make a difference and change the lives of specifically youth but also all citizens as a whole.”